A babka is a sweet braided bread or cake which originated in the Jewish communities of Poland and Ukraine. It is popular in Israel (often referred to as simply a yeast cake: עוגת שמרים) and in the Jewish diaspora. It is prepared with a yeast-leavened dough that is rolled out and spread with a filling such as chocolate, cinnamon, fruit, or cheese, then rolled up and braided before baking. 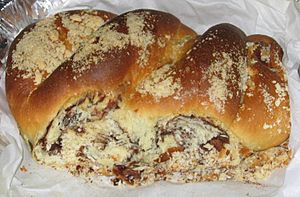 A traditional American-style chocolate babka, made with a dough similar to challah, and topped with streusel

Babka developed in the Jewish communities of Eastern Europe in the early 19th century. Extra challah dough was rolled up with fruit jam or cinnamon and baked as a loaf alongside the challah. Chocolate was not originally used, as it was not generally available; the chocolate babka was likely a mid-20th century American development. Its name (though not necessarily the dish itself) may be related to a type of Easter cake popular in Poland and western Ukraine known as baba or the diminutive babka, which means "grandmother" in Polish, related to the Yiddish bubbe.

Although the Polish and Ukrainian babka are mutually eponymous with their Jewish counterparts, the appearance and preparation of each babka is drastically different. The Eastern European babka draws its name from its tall, stout, fluted sides formed in a traditional pan, and reminiscent of a grandma's skirt. In comparison, the variant introduced to Western culture by emigres to New York consists of strands of rich yeasted dough interwoven and baked in a loaf tin.

Babka was mostly unheard of outside of the Polish Jewish community until the latter part of the 20th century. European-style bakeries started to offer it in late 1950s Israel and in the US. In addition to chocolate, various fillings including poppy seeds, almond paste, cheese, and others became popular, and some bakers began to top it with streusel.

Beginning in the 2010s the popularity of babka increased across the United States, especially in New York, where a popular Israeli bakery from Tel Aviv owned by Gadi Peleg, Breads Bakery, opened a location and began to sell their babka filled with traditional fillings such as cinnamon, as well as non-traditional fillings such as Nutella, apple, cheesecake, as well as a savory version with za'atar and feta cheese. They became well known for their chocolate babka.

The newfound popularity of babka across the United States and Canada among both Jews and non-Jews has resulted in many non-traditional variations filled with such fillings as buffalo chicken, rainbow, everything bagel, and cookie butter, among others. Babka has also been featured on restaurant menus and in such dishes as french toast, cheesecake, babka ice cream, and babka ice cream sandwiches, among others.

Babka has become available at grocery stores across the US, with Trader Joe’s offering their own chocolate version made in Brooklyn.

It consists of either an enriched or laminated dough; which are similar to those used for challah, and croissants respectively, that has been rolled out and spread with a variety of sweet fillings such as chocolate, cinnamon sugar, apples, sweet cheese, Nutella, mohn, or raisins, which is then braided either as an open or closed plait, topped with a sugar syrup in order to preserve freshness and make the bread moister. It is sometimes topped with a streusel topping.

American style babka is traditionally made with a dough similar to challah dough and is often topped with streusel, poppy seeds or a crumb topping.

Israeli style babka (עוגת שמרים) is made with a laminated dough, enriched with butter, which is then folded and rolled it multiple times to create many distinct layers, similar to that used for Israeli style rugelach, and also croissant dough. Israeli style babka is available with a wider array of fillings and shapes. It is most often shaped into a loaf pan, but it is also sometimes made into individual babkas, a pie-shaped babka, formed into a ring shape, or braided and baked free form or formed into individual twists similar to a cheese straw. The most popular fillings are chocolate which is commonly made with Haschahar Ha'ole, and Israeli chocolate spread, mohn (a sweetened poppy seed paste filling), and sweet cheese typically made with gvina levana. They are rarely topped with a streusel topping. It is typically sweet; however, savory versions are also popular in Israel, often containing labneh and za'atar. It is also often baked as "roses", individual pastries shaped to resemble a rose. They may also be made with a closed plait, versus the more common open plait.

A similar cake called a kokosh is also popular in Jewish bakeries. Kokosh also comes in chocolate and cinnamon varieties, but it is lower and longer than babka, is not twisted, and not topped with streusel. Cakes of these styles are typically, but not universally, considered couronnes baked in loaf pans, rather than babkas. Kokosh has become popular in North American cities with large Jewish populations, including Montreal, New York, Chicago, Miami, and Toronto.

Cafés in London, England have produced a variant, served at Easter, which combines the filling and flavours of a traditional hot cross bun with babka dough. Vice magazine wrote "[it's] an unholy union, but it's delicious", and called it "a mixing two faiths in the oven". These comments are explained by The Observer food critic Jay Rayner, who tweeted "Babka is a Jewish bread and the whole ‘hot cross’ thing is about nailing Mr Jesus to the two by four".

All content from Kiddle encyclopedia articles (including the article images and facts) can be freely used under Attribution-ShareAlike license, unless stated otherwise. Cite this article:
Babka Facts for Kids. Kiddle Encyclopedia.