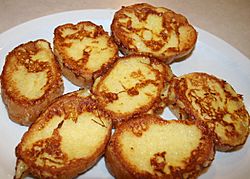 French toast is a breakfast food made by soaking bread in eggs.

Milk, sugar or cinnamon are commonly added. The dish is often topped with powdered sugar, butter, fruit, syrup, or other items. According to what is popular in local cuisine, many of the spices that are added to bread or egg dishes are in cooking.

In the United Kingdom, it is sometimes known as Eggy Bread. It is a Christmas time dessert in Portugal and Brazil called rabanada. And is an Easter dessert in Spain called torrijas.

All content from Kiddle encyclopedia articles (including the article images and facts) can be freely used under Attribution-ShareAlike license, unless stated otherwise. Cite this article:
French toast Facts for Kids. Kiddle Encyclopedia.