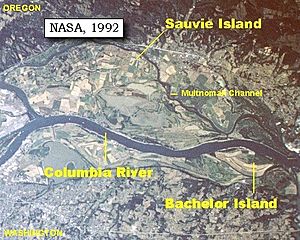 Most of Bachelor Island is part of the Ridgefield National Wildlife Refuge.

Lewis and Clark first called the island "Green Bryor Isd," when they passed it while traveled downriver in 1805. They changed the name to "Quathlahpotle Island" in 1806, during their return voyage upriver. The name honored a large village, "Quathlahpotle", of 14 wooden houses and 900 inhabitants on the mainland nearby.

In 1849 or 1850 three bachelors took donation claims and settled on the island, giving rise to its present name, Bachelor Island.

All content from Kiddle encyclopedia articles (including the article images and facts) can be freely used under Attribution-ShareAlike license, unless stated otherwise. Cite this article:
Bachelor Island (Washington) Facts for Kids. Kiddle Encyclopedia.