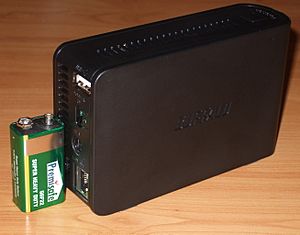 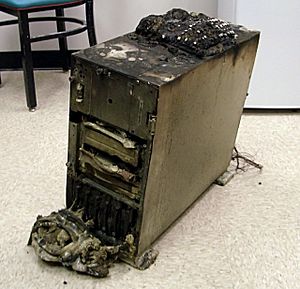 This computer was used to store files, before a fire hit

In the context of computers and computer systems, a backup is a copy of some data. This copy can be used when the original data is changed, or lost. Losing data is common: A 2008 survey found that two thirds of respondents had lost files on their home PC. Another purpose of backing up data is to have a copy that represents an earlier state of the data, before it was changed. Organisations may have rules which state how long data should be kept, and what kinds of data these rules apply to. In many countries there are rules that specify that certain kinds of data need to be kept for a given time. An example of this is the data used for accounting.

There are different types of backup systems that use different kinds of media. Common backup media includes:

Some of the backup media are portable, and can easily be stored in a safe location. The problem with storing tapes in a bank safe, for example is that they are only available during the opening hours of the bank.

Another issue has commonly been the speed of the backup. Media such as digital tapes can store a lot of data, but accessing them is relatively slow. Tapes can only be read or written in sequence, while media such as hard disks or optical drives are basically random access. When data is backed up, its encoding is often changed. This makes it possible to use codes such as Cyclic redundancy checks, which can detect, and sometimes repair an error.

Reasons for doing a backup

Backups are usually done for one of the following reasons:

A full backup copies all of the data. This means that if the main copy of the data is lost, we can bring it all back simply by copying the data back from the backup.

How long to keep a backup

The Grandfather-father-son system means that we keep different types of backup for different amounts of time. For example, we might do a backup every day, and keep a week's worth of backups. We might then keep one backup for each week for a month, and one backup from each month for a year. This means that we have a backup of our data from a year ago, so that if we realise we need some data from a long time ago, we have that data available. We also have several copies of our recent data, in case one of them doesn't work.

All content from Kiddle encyclopedia articles (including the article images and facts) can be freely used under Attribution-ShareAlike license, unless stated otherwise. Cite this article:
Backup Facts for Kids. Kiddle Encyclopedia.