Bacterial conjugation is the transfer of genetic material between bacterial cells by direct cell-to-cell contact or by a bridge-like connection between two cells.

Conjugation is a mechanism of horizontal gene transfer, as are transformation and transduction, though these two other mechanisms do not involve cell-to-cell contact.

Bacterial conjugation was discovered by Nobel Prize winners Joshua Lederberg and Edward Tatum. They showed that the bacterium Escherichia coli entered a sexual phase during which it could share genetic information.

Bacterial conjugation is often incorrectly regarded as the equivalent of sexual reproduction, since it involves the exchange of genetic material. During conjugation the donor cell provides a conjugative or mobilizable genetic element that is most often a plasmid or transposon. Most conjugative plasmids have systems ensuring that the recipient cell does not already contain a similar element.

The genetic information transferred is often beneficial to the recipient. Benefits may include antibiotic resistance, xenobiotic tolerance or the ability to use new metabolites. Such beneficial plasmids may be considered bacterial endosymbionts. Other elements, however, may be viewed as bacterial parasites and conjugation as a mechanism evolved by them to allow for their spread. 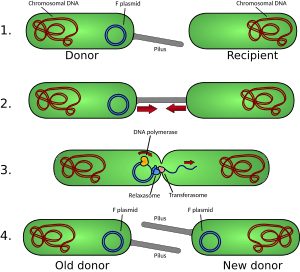 Schematic drawing of bacterial conjugation. Conjugation diagram 1- Donor cell produces pilus. 2- Pilus attaches to recipient cell and brings the two cells together. 3- The mobile plasmid is nicked and a single strand of DNA is then transferred to the recipient cell. 4- Both cells synthesize a complementary strand to produce a double stranded circular plasmid and also reproduce pili; both cells are now viable donors.

The basic conjugative plasmid is the F-plasmid, or F-factor. The F-plasmid is an episome (a plasmid that can integrate itself into the bacterial chromosome) with a length of about 100,000 base pairs.

There can only be one copy of the F-plasmid in a given bacterium, either free or integrated, and bacteria that possess a copy are called F-positive or F-plus (denoted F+). Cells that lack F plasmids are called F-negative or F-minus (F-) and can function as recipient cells.

The nitrogen fixing Rhizobia are an interesting case of inter-kingdom conjugation.

For example, the tumor-inducing (Ti) plasmid of Agrobacterium and the root-tumor inducing (Ri) plasmid of A. rhizogenes contain genes that are capable of transferring to plant cells. These genes turn plant cells into factories producing chemicals used by the bacteria for nitrogen and energy. Infected cells form crown galls or root tumours, respectively. The Ti and Ri plasmids are thus endosymbionts of the bacteria, which are in turn endosymbionts (or parasites) of the infected plant.

Conjugation is a convenient means for transferring genetic material to a variety of targets. In laboratories successful transfers have been reported from bacteria to yeast, plants, mammalian cells, and isolated mammalian mitochondria.

Conjugation has advantages over other forms of genetic transfer. In plant engineering, Agrobacterium-like conjugation complements other standard vehicles such as tobacco mosaic virus (TMV). While TMV is capable of infecting many plant families these are primarily herbaceous dicots. Agrobacterium-like conjugation is also primarily used for dicots, but monocot recipients are not uncommon.

All content from Kiddle encyclopedia articles (including the article images and facts) can be freely used under Attribution-ShareAlike license, unless stated otherwise. Cite this article:
Bacterial conjugation Facts for Kids. Kiddle Encyclopedia.