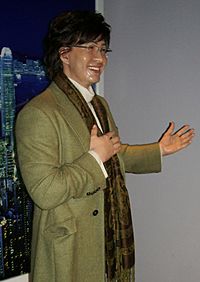 Bae Young Joon is an actor from Seoul. He became popular in Japan on the hit Korean drama, "A Winter Tale". He was born on August 29, 1972. He is known for being handsome. He stars in another Korean history drama, Tae Wang Sa Shin Gi, which is popular in both Korea and Japan.

All content from Kiddle encyclopedia articles (including the article images and facts) can be freely used under Attribution-ShareAlike license, unless stated otherwise. Cite this article:
Bae Yong Joon Facts for Kids. Kiddle Encyclopedia.