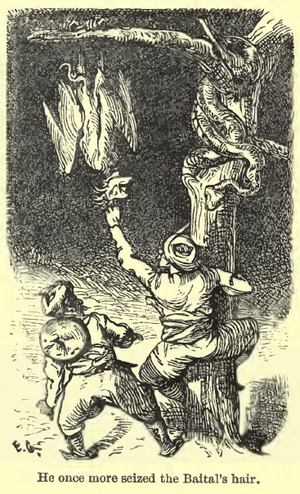 Ernest Griset's depiction of Vikram and the Baital in Richard Francis Burton's 1870 retelling of the story.

Vetala Panchavimshati (Sanskrit: वेतालपञ्चविंशति, IAST: vetālapañcaviṃśati) or Baital Pachisi ("Twenty-five (tales) of Baital"), is a collection of tales and legends within a frame story, from India. It is also known as internationally Vikram-Betaal. It was originally written in Sanskrit.

One of its oldest recensions is found in the 12th Book of the Kathasaritsagara ("Ocean of the Streams of Story"), a work in Sanskrit compiled in the 11th century by Somadeva, but based on yet older materials, now lost. This recension comprises in fact twenty-four tales, the frame narrative itself being the twenty-fifth. The two other major recensions in Sanskrit are those by Śivadāsa and Jambhaladatta.

The Vetala stories are popular in India and have been translated into many Indian vernaculars. Several English translations exist, based on Sanskrit recensions and on Hindi, Tamil, Bengali and Marathi versions. Probably best-known English version is that of Sir Richard Francis Burton which is, however, not a translation but a very free adaptation.

The legendary king Vikramāditya (Vikrama) promises a vamachari (a tantric sorcerer) that he will capture a vetala (or Baital), a celestial spirit Pishacha, celestial spirit analogous to a vampire in Western literature, who hangs upside-down from a tree and inhabits and animates dead bodies.

King Vikrama faces many difficulties in bringing the vetala to the tantric. Each time Vikram tries to capture the vetala, it tells a story that ends with a riddle. If Vikrama cannot answer the question correctly, the vampire consents to remain in captivity. If the king knows the answer but still keeps quiet, then his head shall burst into thousand pieces. And if King Vikrama answers the question correctly, the vampire would escape and return to his tree. He knows the answer to every question; therefore the cycle of catching and releasing the vampire continues twenty-four times. 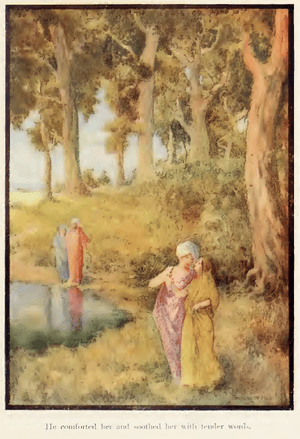 On the twenty-fifth attempt, the Vetala tells the story of a father and a son in the aftermath of a devastating war. They find the queen and the princess alive in the chaos, and decide to take them home. In due time, the son marries the queen and the father marries the princess. Eventually, the son and the queen have a son, and the father and the princess have a daughter. The vetala asks what the relation between the two newborn children is. The question stumps Vikrama. Satisfied, the vetala allows himself to be taken to the tantric. 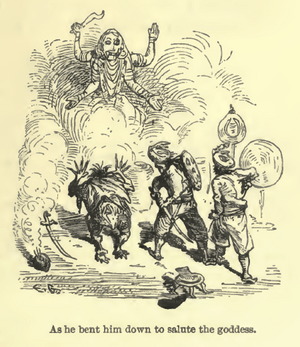 Vikram prepares to behead the tantric. Illustration by Ernest Griset from Burton's Vikram and the Vampire.

On their way to the tantric, Vetala tells his story. His parents did not have a son and a tantric blessed them with twin sons on a condition that both be educated under him. Vetala was taught everything in the world but often ill-treated. Whereas his brother was taught just what was needed but always well treated. Vetala came to know that the tantric planned to give his brother back to his parents and Vetala instead would be sacrificed as he was an 'all-knowing kumara' and by sacrificing him the tantric could be immortal and rule the world using his tantric powers. Vetal also reveals that now the tantric's plan is to sacrifice Vikram, beheading him as he bowed in front of the goddess. The tantric could then gain control over the vetala and sacrifice his soul, thus achieving his evil ambition. The vetala suggests that the king asks the tantric how to perform his obeisance, then take advantage of that moment to behead the sorcerer himself. Vikramāditya does exactly as told by vetala and he is blessed by Lord Indra and Devi Kali. The vetala offers the king a boon, whereupon Vikram requests that the tantric's heart and mind be cleaned of all sins and his life be restored as a good living being and that the vetala would come to the king's aid when needed.

A variation of this story replaces the vetal with a minor celestial who, in exchange for his own life, reveals the plot by two tradesmen (replacing the sorcerer) to assassinate Vikrama and advises Vikrama to trick them into positions of vulnerability as described above. Having killed them, Vikrama is offered a reward by the goddess, who grants him two spirits loyal to Her as his servants.

2017 Tamil film Vikram Vedha was a modern-day adaptation of Vikram Betal story with the characterisation of King Vikramadithyan and the celestial spirit Vedhalam derived from that plot. The title of the film was also derived from the two key characters from the folktale.

In 1985, the story was developed by Sagar Films as a television serial titled Vikram aur Betaal, starring Arun Govil as Vikrama and Sajjan Kumar as the Vetala. It was aired on Doordarshan, the public television broadcaster of India. A remake of that serial by the new generation of Sagar Films, titled Kahaniyaan Vikram aur Betaal Ki, was aired on the Indian satellite channel Colors.

Indian animator Rajiv Chilaka directed Vikram Betal, a television film for Cartoon Network in 2004 which was produced by his Green Gold Animations.

Another 2006 supernatural sitcom Vicky & Vetaal was inspired by the Baital Pachisi.

A web series titled The Vetala was released in 2009, written and directed by Damon Vignale. The series reveals a CGI vetala character in the final episode.

The children's Chandamama, featured a serial story titled New Tales of Vikram and Betal for many years. As the title suggests, the original premise of the story is maintained, as new stories are told by Vetala to King Vikrama.

In the novel, Alif the Unseen, a character named Vikrama the Vampire appears as a jinn. He tells how thousands of years ago, King Vikrama had set off to defeat the Vetala, a vampire jinn terrorizing one of his villages. Vikrama won the Vetala's game of wits, but forfeited his life. The Vetala now inhabits his body.

Both the Kṣemendra and Somadeva recensions derive from the unattested "Northwestern" Bṛhatkathā, and include the Vetala Tales as a small part of their huge inventory. The recensions of Śivadāsa and Jambhaladatta contain only the Vetala Tales and have an unknown relationship to each other and to the other Sanskrit recensions.

All Rescensions (11th–14th century CE) including the Singhasan Battisi

Some time between 1719 and 1749, Ṣūrat Kabīshwar translated Śivadāsa's Sanskrit recension into Braj Bhasha; this work was subsequently translated in 1805 under the direction of John Gilchrist into the closely related Hindustani language by Lallu Lal and others. This was a popular work that played an early role in the development of Literary Hindi and was selected as a Hindustani test-book for military service students in the East India Company. Thus it became the basis of several Hindi editions, and Indian vernacular and English translations; many of these frequently reprinted.

All content from Kiddle encyclopedia articles (including the article images and facts) can be freely used under Attribution-ShareAlike license, unless stated otherwise. Cite this article:
Baital Pachisi Facts for Kids. Kiddle Encyclopedia.