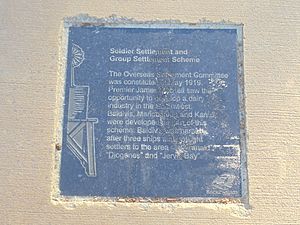 Plaque giving the origin of the name "Baldivis" on the Rockingham Waterfront Pioneer Rotary Walk in Rockingham, Western Australia.

Baldivis is a semi-rural residential suburb 46 kilometres (29 mi) south of Perth, and 11 kilometres (6.8 mi) southeast of the regional centre of Rockingham. It is located within the City of Rockingham local government area.

The name of Baldivis was thought up by settlers in the area who were attracted to the region by the 1920s Group Settlement Scheme. The name derives from three ships which travelled to Western Australia in 1922, all within six weeks of each other, bring settlers under the scheme. They were named BALranald, DIogenes and the JerVIS Bay. It was the maiden voyage for all three ships and they were all built in the same shipyard in the same year.

Land parallel to the eastern side of Baldivis Road was set aside for a tramway between Jandakot in the north and Karnup to the south, to provide access to the Group Settlement Scheme land. Although part of the tramway was constructed, it was never constructed in Baldivis. The tramway reserve is retained for open space.

Many of the road names in Baldivis (e.g. Sixty Eight Road, Fifty Road, etc.) originate from the group numbers.

Land in the western portion of Baldivis was zoned for urban development in the 1990s, and the suburb has been progressively developed for residential. The first residential estate to be developed was Settlers Hills, by Stockland.

The western half of Baldivis (generally west of Baldivis Road) is composed of undulating sand and limestone soil with occasional wetlands. The high point is known as Tamworth Hill, which is the site of a water reservoir. Much of this land has been developed for residential use. East of Baldivis Road the land is generally flat and comprises sand and clay soils; the exception being the sandy hill known as Dog Hill. These areas are generally used for rural purposes. The western portion of Baldivis contains tuart trees; some of the trees have been retained within the residential areas.

Baldivis is serviced by the Transperth 564 bus route, operated by Southern Coast Transit, which operates from Warnbro Train Station. This route services the Baldivis Town Centre during business hours, travelling through Settlers Hills via Arpentuer Drive through Evermore Heights, The Ridge and Terminate in The Dales (Smirk Road). Route 567 services The Rivergums and Heritage Park. It also connects the Baldivis community with a regular service to the Baldivis Town Centre. Both routes run 7 days a week running every 30 minutes and every 10 minutes in peak hours. Route 568 services Baldivis Central and the newly developed Town Side estate and Retirement village. Route 565 services through newly established Baldivis Quarter.

The Kwinana Freeway runs through Baldivis, providing vehicle access to Perth and Bunbury. Safety Bay Road links Baldivis with neighbouring suburbs to the west like Rockingham and Warnbro.

The principal shared path along the Kwinana Freeway provides bicycle access to Perth.

There is plenty for Residents to enjoy within Baldivis.

There are nine schools in Baldivis, with more opening in the near future:

The main shopping facilities in Baldivis are located in the area known as the Baldivis Town Centre, on Settlers Avenue, and includes the Baldivis Shopping Centre (opened in mid-2007) owned by Stockland. Extensions completed in 2015 expanded the existing Shopping Centre to include a Food Court/Restaurant precinct, increased car park numbers and a Woolworths.

The Baldivis Soccer Club was formed in 2012 and are located at Baldivis South Sports Pavilion. The club has grown rapidly and now have 18 teams from the age of 6 right through all age groups senior men's/women's teams.

The Baldivis White Knights Cricket Club (WKBCC) was formed in 2001, located at Arpenteur Park in Baldivis.

The Baldivis Brumbies Football Club (BFC) was formed in 1986 and currently has 3 grounds and 40 teams.

All content from Kiddle encyclopedia articles (including the article images and facts) can be freely used under Attribution-ShareAlike license, unless stated otherwise. Cite this article:
Baldivis, Western Australia Facts for Kids. Kiddle Encyclopedia.