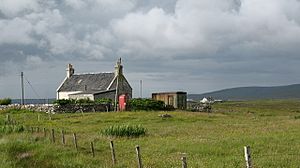 The only telephone box on Baleshare

Baleshare (Scottish Gaelic: Baile Sear) is a flat tidal island in the Outer Hebrides of Scotland.

Baleshare lies to the south-west of North Uist. Its economics and community were boosted by the building of a causeway in 1962. The 350 m (380 yd) causeway was built by William Tawse Ltd. The island is extremely flat by Hebridean standards, rising to only 12 metres (39 feet) above sea level and known for its long sandy beach. It has a population of 49 living in two settlements: Samhla and Teananachar.

The name means 'east farm' or 'east town'. The 'west town' may have been on land that was said to exist to the west of Baleshare, washed away in the sixteenth century, over which it was possible to walk to the Monach Islands at low tide. The Monachs are some 15 kilometres (9.3 miles) to the west. Another story suggests there was once a land bridge to Kirkibost, 100 metres (330 feet) to the north. The basis for this seems to be a reference in the Exchequer Rolls for 1542 that the valued rental had been decreased due to encroachment by the sea at some unspecified (presumably recent) date.

Two prehistoric settlements have been uncovered, which contain the remains of a circular stone house and pieces of pottery, bone and metal. In common with other sites in the area, they are threatened by coastal erosion.

All content from Kiddle encyclopedia articles (including the article images and facts) can be freely used under Attribution-ShareAlike license, unless stated otherwise. Cite this article:
Baleshare Facts for Kids. Kiddle Encyclopedia.