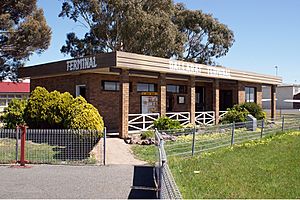 In 1940, in World War II, the site was taken over by the Australian government and a Royal Australian Air Force (RAAF) airfield known as Empire Air Training Scheme No 1 Wireless Air Gunners School was begun (EATS 1 WAGS) at the Ballarat Showgrounds on 22 April 1940.

The hangar was moved to the Commonwealth Flax Mill, and four Bellman Hangars and numerous "P"-type hut buildings were erected. In mid-1940 the Wireless Air Gunners School moved to the aerodrome. At first the wireless operators were mainly trained in panel vans, but from mid 1941, they used CAC Wackett trainer aircraft.

The RAAF continued to use the airfield as its Radio School until 1961. The Shire of Ballarat took over the airport as a civil airport and kept many of the hangars and other structures. Most of the P Huts were sold by the Australian government.

The site was listed on the Victorian Heritage Register in 2007 because of its history with the Empire Air Training Scheme in Victoria.

The airport still has an important role in emergency services operation, civil operation, and flight training. Many community groups and organisations use the old buildings.

The airfield was also used for motor sport, starting on Australia Day in 1947 when it held its first motor race meeting. In February there was an International Formula Libre race, which was attended by some European Formula 1 teams. BRM factory drivers Dan Gurney and Graham Hill finished first and second in the major race, the Victoria Trophy with Ron Flockhart third in a Cooper. On the night before the race Gurney's car was stolen from its hangar and driven into or hidden with, hay bales out on the track.

All content from Kiddle encyclopedia articles (including the article images and facts) can be freely used under Attribution-ShareAlike license, unless stated otherwise. Cite this article:
Ballarat Airport Facts for Kids. Kiddle Encyclopedia.