Baloghia inophylla is a rainforest tree of eastern Australia. It is also known as the brush bloodwood, as it occurs in brushes, (a nineteenth-century term for rainforest), as well as bloodwood, as the clear sap is blood red. Other common names include ivory birch and scrub bloodwood.

Brush bloodwood occurs on the eastern coast of Australia from Mount Dromedary (36° S) near Narooma in southern New South Wales to Coen (13° S) in far north Queensland. It also occurs in New Caledonia, Lord Howe Island and Norfolk Island. The habitat is most types of rainforest except the cool temperate forests.

It is a medium-sized tree, reaching 25 metres (82 ft) in height and with a trunk diameter of 50 centimetres (20 in). The trunk is usually cylindrical, though some tree bases are fluted. The bark is creamy brown, with reddish and brown markings. The bark also features raised squarish plates of bark.

Leaves are thick and glossy, 7 to 13 cm long. They are opposite, simple, not toothed, mostly oblong in shape, though at other times elliptical or oval. Identification of this species is made easier when noticing the blunt leaf point and nearly horizontal leaf veins. At the base of the leaf are two swollen glands. Leaf stalks are 8 millimetres (0.31 in) long, and somewhat channelled on the upper side.

Creamy pink flowers occur on racemes in the months of May to January. The five-petaled flower is fragrant, relatively large and attractive. Male and female flowers form on separate racemes.

The fruit matures from February to May, though occasionally at other times of the year. It is a brown roundish capsule 12 to 18 mm long. Inside are three cells, with a single mottled brown seed inside, 8 mm long, although many capsules contain no seeds. Fresh seed germinates reliably, and cuttings strike well. 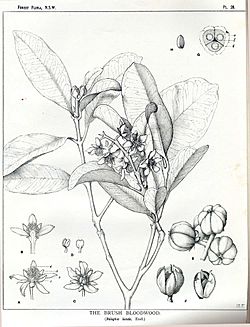 The sap forms a red pigment.

All content from Kiddle encyclopedia articles (including the article images and facts) can be freely used under Attribution-ShareAlike license, unless stated otherwise. Cite this article:
Baloghia inophylla Facts for Kids. Kiddle Encyclopedia.