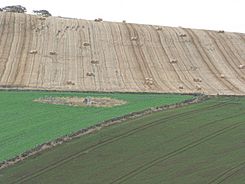 Balquhain, also known as Balquhain Stone Circle, is a recumbent stone circle 3 miles (4.8 km) from Inverurie in Scotland. It is a scheduled ancient monument.

It is located in farmland at an altitude of c. 100 metres (330 ft) on a terraced hillside leading up to a prominent summit called Mither Tap. It has been suggested to once have consisted of 12 stones, 4 of which remain standing, with another four fallen, the final four presumed to have been moved.

The recumbent altar stone is 3.8 metres (12 ft) wide, 1.7 metres (5.6 ft) high and 1.05 metres (3.4 ft) deep, it has been estimated to weigh over ten tonnes. It is made is of a type of white grained granite that has been suggested to have been brought some distance to the location. It was suggested that it was designed to create an artificial skyline, horizontally levelled with chockstones; one of which is still visible under the stone. The eastern flanker stone is 2 metres (6.6 ft) wide and made of dark grey basalt with a round top. The western flanker stone is 2.25 metres (7.4 ft) wide and made of reddish quartzite bearing inclusions of white quartz and having a pointed top. The stone east of the east flanker is made of red granite. There is also an outlying stone 6 metres (20 ft) to the southeast of the circle that is 3.1 metres (10 ft) high and made of white quartz with roseate seams.

The circle has been estimated to have been between 18.3 metres (60 ft) to 21.3 metres (70 ft) in diameter. Alexander Thom suggested the circle had been 20.7 metres (68 ft) and Fred Coles of only 19.5 metres (64 ft). The circle also displays suggested rock art including cup marks and a noticeable rounded bump on the recumbent stone that resembles the outline of the prominent hill behind it.

All content from Kiddle encyclopedia articles (including the article images and facts) can be freely used under Attribution-ShareAlike license, unless stated otherwise. Cite this article:
Balquhain Facts for Kids. Kiddle Encyclopedia.