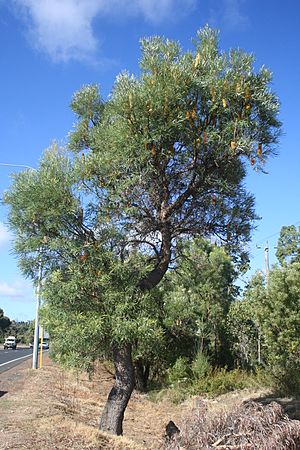 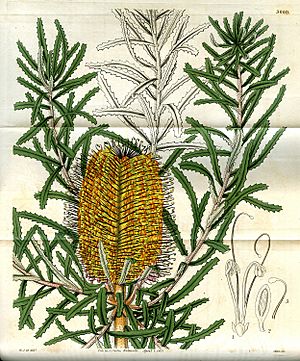 Illustration from The Botanical Magazine (1831)

Banksia littoralis, commonly known as the swamp banksia, swamp oak, river banksia or seaside banksia and the western swamp banksia, is a species of tree that is endemic to the south-west of Western Australia. The Noongar peoples know the plant as pungura, boongura or gwangia. It has rough, crumbly bark, linear, more or less serrated leaves arranged in whorls, yellow flowers and up to two hundred follicles in each head.

Banksia littoralis was first formally described by Robert Brown in Transactions of the Linnean Society of London from specimens he collected from around the shores of King George Sound, "especially of Princess Royal Harbour" in December 1801.

Swamp banksia to coastal areas of south western Western Australia from the Wheatbelt, Peel, South West and Great Southern regions where it is often situated on along creeks and rivers, in low-lying, seasonally damp areas like swamps and depressions where it grows well in high moisture peaty to sandy soils. It is often part of low woodland communities and often is associated with Melaleuca preissiana and also in Eucalyptus gomphocephala forest communities and is rarely found as a part of low coastal kwongan communities. The range extends from around Mount Lesueur in the north to around Cape Leeuwin in the south west extending east to around Two Peoples Bay and the Stirling Range.

Banksia littoralis is relatively easy to grow. It is possibly not as sensitive to dieback as other western banksias. Seeds do not require any treatment, and take 20 to 36 days to germinate.

All content from Kiddle encyclopedia articles (including the article images and facts) can be freely used under Attribution-ShareAlike license, unless stated otherwise. Cite this article:
Banksia littoralis Facts for Kids. Kiddle Encyclopedia.