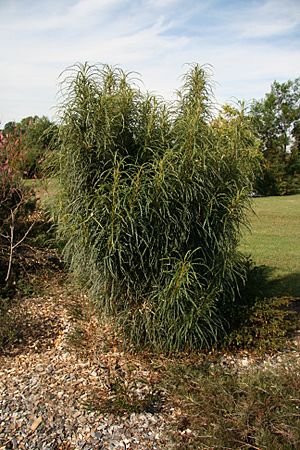 Banksia prolata is a species of bushy shrub that is endemic to Western Australia. It has linear, serrated or pinnatifid leaves, yellow flowers in heads of between 150 and 250, and egg-shaped follicles.

This species was first formally described in 1810 by Robert Brown who gave it the name Dryandra longifolia and published the description in Transactions of the Linnean Society of London from material collected near Lucky Bay. The specific epithet (longifolia) is derived from the Latin words longus, "long" and folium, "leaf".

In 1996, Alex George described three subspecies of Dryandra longifolia in the journal Nuytsia:

In 2007 Austin Mast and Kevin Thiele transferred all dryandras to the genus Banksia, but since the name Banksia longifolia had already been used (Banksia longifolia Donn ex F.Dietr.), Mast and Thiele gave this species the name Banksia prolata. The epithet (prolata) is from a Latin word meaning "drawn out". The subspecies were named archeos, calcicola and prolata respectively. The names of the subspecies are accepted by the Australian Plant Census.

All content from Kiddle encyclopedia articles (including the article images and facts) can be freely used under Attribution-ShareAlike license, unless stated otherwise. Cite this article:
Banksia prolata Facts for Kids. Kiddle Encyclopedia.