Barataria Bay [lower right] is a bay of the Gulf of Mexico that is located between Empire and Grand Isle, Louisiana [enlarge].

Barataria Bay (French: Baie de Barataria), also Barrataria Bay, is a bay of the Gulf of Mexico, about 15 miles (24 km) long and 12 miles (19 km) wide, in southeastern Louisiana, in Jefferson Parish and Plaquemines Parish, United States. It is separated from the gulf by two barrier islands, Grand Isle and Grand Terre.

The bay takes its name from the Spanish novel Don Quixote, in which the insula Barataria, or Barataria island, appears as a fictional territory governed by Sancho Panza.

The bay is indented and marshy, with many islands. The surrounding low-lying Barataria country, south of New Orleans and west of the Mississippi River Delta, is noted for its shrimp industry (based at villages built on pilings above the coastal marshes), muskrat trapping, natural gas wells, oil wells, and sulfur production. Its inlet is connected to the Gulf Intracoastal Waterway system.

Barataria Bay was used in the early 19th century as the base of pirates, privateers, and smugglers led by the pirate Jean Lafitte. They were referred to as the Baratarians.

Today the bay is a notable source of shrimp and sulfur, as well as of muskrat fur, natural gas, and petroleum.

Until Hurricane Betsy made landfall in 1965, Barataria Bay was home to Manila Village. 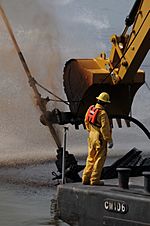 Crews work to control the damaged wellhead spewing oil into the waters of Barataria Bay.

The geyser was brought under control and the wellhead was repaired and capped on 1 August 2010, five days after the collision.

All content from Kiddle encyclopedia articles (including the article images and facts) can be freely used under Attribution-ShareAlike license, unless stated otherwise. Cite this article:
Barataria Bay Facts for Kids. Kiddle Encyclopedia.