Barnesville is a town in Montgomery County, Maryland, United States. It was incorporated in 1888. The population was 144 at the 2020 census.

The Maryland General Assembly chartered the town of Barnesville in 1811 and named it in honor of its earliest settler, Williams Barnes. In its early years, the village developed as a regional center for industry and commerce, with two taverns, a blacksmith shop, and a resident physician, a Dr. Lisle. In the 1830s, Barnesville Academy operated on the Hays Farm under the leadership of Irish immigrant Thomas Carr Lannan. Jesuit Ministers from Frederick, Maryland first held mass in Barnesville and led in the creation of St. Mary's Church in 1807. The church yard contains several graves from immigrant workers who died of cholera while building the Chesapeake & Ohio Canal. Barnesville Baptist Church was organized in 1871 and still worships in its original frame building on the east side of the town.

According to the United States Census Bureau, the town has a total area of 0.49 square miles (1.27 km2), all of it land.

The climate in this area is characterized by hot, humid summers and generally mild to cool winters. According to the Köppen Climate Classification system, Barnesville has a humid subtropical climate, abbreviated "Cfa" on climate maps.

There were 67 households, of which 40.3% had children under the age of 18 living with them, 67.2% were married couples living together, 4.5% had a female householder with no husband present, 10.4% had a male householder with no wife present, and 17.9% were non-families. 17.9% of all households were made up of individuals, and 9% had someone living alone who was 65 years of age or older. The average household size was 2.57 and the average family size was 2.89.

At the top of a ridge with views of Sugarloaf Mountain to the north and the Catoctin Mountain and Blue Ridge ranges to the west, Barnesville enjoys a connection with the rhythms of the natural world while being within commuting distance of the nation's capital. The town's motto, "A Caring Community", is a testament to the sense of place enjoyed by the town's residents and their neighbors in the Agricultural Reserve of Western Montgomery County.

Barnesville is served by the MARC commuter rail system. The station building was originally a gas metering station in Rockville; it was moved to Barnesville in 1977.

Barnesville is served by the Montgomery County Public Schools.

Schools that serve Barnesville include: 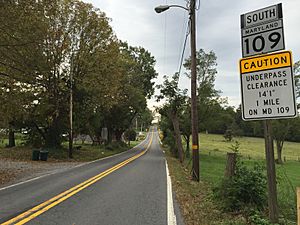 All content from Kiddle encyclopedia articles (including the article images and facts) can be freely used under Attribution-ShareAlike license, unless stated otherwise. Cite this article:
Barnesville, Maryland Facts for Kids. Kiddle Encyclopedia.