Barnesville is a city in Clay County, Minnesota, United States. The population is 2,582 at the 2010 census. Barnesville Potato Days is held there annually in August.

Interstate 94/U.S. Highway 52, as well as Minnesota State Highways 9 and 34 are four of the main routes in the city. 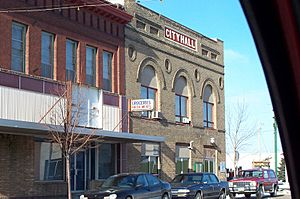 There were 1,013 households, of which 39.9% had children under the age of 18 living with them, 53.5% were married couples living together, 10.7% had a female householder with no husband present, 4.5% had a male householder with no wife present, and 31.3% were non-families. 27.5% of all households were made up of individuals, and 14% had someone living alone who was 65 years of age or older. The average household size was 2.50 and the average family size was 3.05.

Barnesville Potato Days is held each year during the end of August, and draws approximately 14,000 people each year.

This top potato-growing region, the Red River Valley, touts its taters at potato-peeling and picking contests and food booths serving potato pancakes, dumplings and sausage. The festival also includes a parade, car show, and street dances. Of the many events, mashed potato wrestling is the best known and most respected.

Barnesville is the center of I.S.D. 146. Atkinson Elementary is for students grades K–6; Barnesville High is grades 7–12. There are about 820 students in the school system, with roughly 370 students enrolled in the high school, and around 450 in the elementary. The superintendent is Dr. Jon Ellerbusch. Barnesville's mascots are the Lady Trojans and Trojans.

All content from Kiddle encyclopedia articles (including the article images and facts) can be freely used under Attribution-ShareAlike license, unless stated otherwise. Cite this article:
Barnesville, Minnesota Facts for Kids. Kiddle Encyclopedia.