Barry Morris Goldwater Jr. (born July 15, 1938) is an American politician. He is a former Republican member of the United States House of Representatives from California, serving from 1969 to 1983. He is the son of U.S. Senator and 1964 Republican presidential nominee Barry Goldwater.

Goldwater was born in Los Angeles, California on July 15, 1938, the son of Barry M. Goldwater and his wife Margaret Johnson. He graduated from Staunton Military Academy in Staunton, Virginia, in 1957. Goldwater attended the University of Colorado, and graduated from Arizona State University in 1962. He then worked as a stockbroker, public relations executive, and in import-export business, before being elected to Congress.

In 1972, he married Susan Lee Gherman, daughter of Dr. E. Mortimer and Irene Gherman of Newport Beach, California. They had a son, Barry M. Goldwater, III. The couple divorced in May 1979. 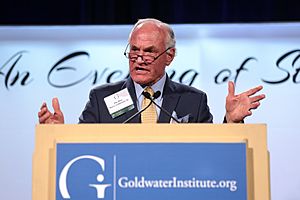 After retiring from politics, Goldwater moved to Los Angeles and pursued a career in the financial sector, specializing in security law and underwriting. His clients were major U.S. banks and insurance companies. Goldwater became a member of the New York Stock Exchange, and a partner in what is now Wedbush Securities (formerly Noble Cook, Inc.)

He has served on the board of the Barry M. Goldwater Scholarship and Excellence in Education Program. As of October 2018, he serves on the board of directors of the Goldwater Institute. The Goldwater Institute is a non-profit political think tank which studies and publishes findings on public policies that align with the conservative values promoted by Goldwater's father. Goldwater generally supported legislation and policies that embrace economic independence, individual rights, and limited government.

Goldwater maintains his contact with Republican and Democratic leaders, as well as celebrity activists, and is still active in the conservative political movement. He is a member of the American Numismatic Association, and is currently director of the National Collector's Mint.

Goldwater has won several awards, including the Achievement Award from the National Academy of Television Arts & Sciences, an award from the President's Commission on Employment of the Handicapped, the Distinguished Service Award of the A.C.A., and the Conscience of the Congress Award of the American Conservative Union.

All content from Kiddle encyclopedia articles (including the article images and facts) can be freely used under Attribution-ShareAlike license, unless stated otherwise. Cite this article:
Barry Goldwater Jr. Facts for Kids. Kiddle Encyclopedia.