Amphibian species worldwide have been in decline due to climate change including but not limited to: increased UV radiation, change in precipitation, and various pathogen outbreaks (chytrid fungus which causes Chytridiomycosis). However, habitat destruction, degradation, and pollution on a local scale have resulted mainly from land and watershed urbanization. These changes, in turn, affect, among others, water quality and biological community composition of rivers and water systems in the surrounding environment. The wide effects of contamination and degradation on these water systems make analyzing their specific sources difficult since the interactions of factors and overlapping effects may occur. Nonetheless, it is important to study these consequences so that future impact on this and other species may be reduced.

Dissolved oxygen (DO) is required at specific levels to maintain healthy aquatic life. To do this, "national ambient water quality criteria" have been set by the U.S. Environmental Protection Agency and measurements have been made since 1969, albeit inconsistently. Hypoxia, a state of reduced oxygen, may hinder embryonic and fetal development as well as decrease oxygen consumption in adults. Apart from prenatal developments, physiological responses may also arise from a lack of oxygen. Some of the known responses include "Increases in heart rate and buccal pumping, behavioral hypothermia, and gill hypertrophy".

Since this species is an obligately aquatic neotene, retains its gills through its adult life, it must absorb oxygen through its gills or skin. However, the method in which it performs this absorption has yet to be determined. One study found that when presented with a low DO level, this salamander increases its body movement. They theorized two explanations for this reaction:

Much of the Barton Springs salamander's life history remains unknown at this time. It appears that they feed primarily on small aquatic crustaceans, but can supplement their diet with other items, such as earthworms. In addition, aquatic vegetation has been shown to be a critical component to the salamander's habitat; their numbers dropped precipitously after the removal of much of the vegetation from Barton Springs, and have recovered after habitat restoration programs were implemented.

The species epithet (sosorum) is an acronym for "Save Our Springs Ordinance" (of the City of Austin) although it is widely if erroneously believed to refer to SOS Alliance, a local preservation group combined with a Latin genitive plural ending. 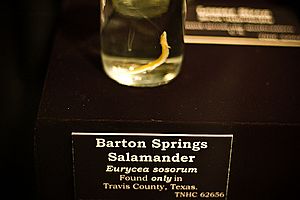 Despite inhabiting an urban area, E. sosorum was not described until 1993. It was put on the federal List of Threatened and Endangered Species in 1997. The salamander's listing prevented the City of Austin from cleaning the Barton Springs Pool as it had for 70 years—with bleach. As a result, the City of Austin applied for and was issued an Incidental Take Permit under Section 10(a)(1)(b) of the Endangered Species Act by the U.S. Fish and Wildlife Service in 1998. The permit has a term of 15 years and allows incidental taking of salamanders during pool cleaning and maintenance. As a mitigation measure, the City offered to direct 10% of revenue generated through pool entry fees into a conservation fund that is used for research and habitat enhancement.

All content from Kiddle encyclopedia articles (including the article images and facts) can be freely used under Attribution-ShareAlike license, unless stated otherwise. Cite this article:
Barton Springs salamander Facts for Kids. Kiddle Encyclopedia.