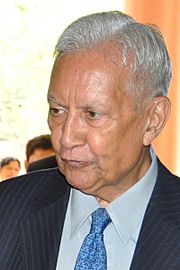 Basant Kumar Birla (12 January 1921 – 3 July 2019) was an Indian businessman. He was a member of the noted Birla family. He was chairman of the Krishnarpan Charity Trust, B.K. Birla Institute of Engineering & Technology (BKBIET) and other educational trusts and institutes. He also wrote many books, including his autobiography Svantah Sukhaya.

All content from Kiddle encyclopedia articles (including the article images and facts) can be freely used under Attribution-ShareAlike license, unless stated otherwise. Cite this article:
Basant Kumar Birla Facts for Kids. Kiddle Encyclopedia.