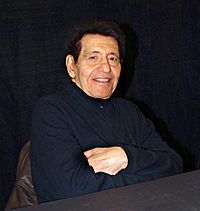 Basil Gogos (March 12, 1929 – September 13, 2017) was an Egyptian-born American illustrator. He was born in Alexandria, Egypt. He was best known for his portraits of movie monsters which appeared on the covers of Famous Monsters of Filmland magazine in the 1960s and 1970s.

All content from Kiddle encyclopedia articles (including the article images and facts) can be freely used under Attribution-ShareAlike license, unless stated otherwise. Cite this article:
Basil Gogos Facts for Kids. Kiddle Encyclopedia.