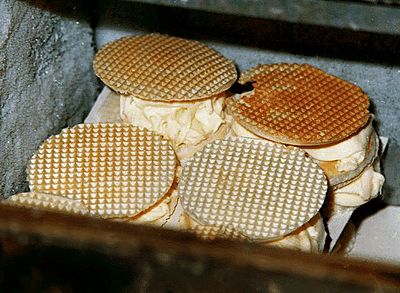 Bastani sonnati (Persian: بستنی سنتی, also called: "saffron ice cream" or "Flower and nightingale ice cream") is an Iranian ice cream with a sticky and elastic texture with high fat content similar to mastic ice creams or "Kulfi (Indian ice cream)". This ice cream is made from milk, sweet cream, eggs, sugar, rose water (or "rose leaves"), saffron, vanilla, and pistachios. It is best known as Persian ice cream. Sometimes it is also customary to add to this ice cream: "Salep (orchid powder)" and even a bit of gum like gum ice cream to give it a more sticky and elastic look.

Initial evidence of eating cold desserts in the Persia region in 500 BC during the The Ahmani Kingdom. During this time, it was customary to mix Snow with "Sorbet (fruit peel)" and to sprinkle with it: saffron, grape juice, and fruits. In 400 BC, the dessert was invented: "Faloodeh" and used to mix it with Persian ice cream so as not to lose the liquid of the melted ice cream.

At the end of the 19th century, the "Persian ice cream" was invented in today's version of hard texture, similar to the gum ice creams that were in the region: Turkey and Syria. This ice cream was called "Bashtani Sonati." This version was prepared on a Cream basis with very high fat percentages and sometimes also with eggs, instead of "crushed gum powder" with "orchid powder" plus spices in honor of the Persian king and also for seasoning of Persian desserts such as Faloodeh.

All content from Kiddle encyclopedia articles (including the article images and facts) can be freely used under Attribution-ShareAlike license, unless stated otherwise. Cite this article:
Bastani sonnati Facts for Kids. Kiddle Encyclopedia.