The Bat Creek inscription (also called the Bat Creek stone or Bat Creek tablet) is an inscribed stone collected as part of a Native American burial mound excavation in Loudon County, Tennessee, in 1889 by the Smithsonian Bureau of Ethnology's Mound Survey, directed by entomologist Cyrus Thomas. The inscriptions were initially described as Cherokee, but in 2004, similarities to an inscription that was circulating in a Freemason book were discovered. Hoax expert Kenneth Feder says the peer reviewed work of Mary L. Kwas and Robert Mainfort has "demolished" any claims of the stone's authenticity. Mainfort and Kwas themselves state "The Bat Creek stone is a fraud."

Thomas inaccurately identified the characters on the stone as "beyond question letters of the Cherokee alphabet," a writing system for the Cherokee language invented by Sequoyah in the early 19th century. The stone became the subject of contention in 1970 when Semitist Cyrus H. Gordon proposed that the letters of inscription are Paleo-Hebrew of the 1st or 2nd century AD rather than Cherokee, and therefore evidence of pre-Columbian transatlantic contact. According to Gordon, five of the eight letters could be read as "for Judea." Archaeologist Marshall McKusick countered that "Despite some difficulties, Cherokee script is a closer match to that on the tablet than the late-Canaanite proposed by Gordon," but gave no details.

In a 1988 article in Tennessee Anthropologist, economist J. Huston McCulloch compared the letters of the inscription to both Paleo-Hebrew and Cherokee and concluded that the fit as Paleo-Hebrew was substantially better than Cherokee. He also reported a radiocarbon date on associated wood fragments consistent with Gordon's dating of the script. In a 1991 reply, archaeologists Robert Mainfort and Mary Kwas, relying on a communication from Semitist Frank Moore Cross, concluded that the inscription is not genuine paleo-Hebrew but rather a 19th-century forgery, with John W. Emmert, the Smithsonian agent who performed the excavation, the most likely responsible party. In a 1993 article in Biblical Archaeology Review, Semitist P. Kyle McCarter, Jr. stated that although the inscription "is not an authentic paleo-Hebrew inscription," it "clearly imitates one in certain features," and does contain "an intelligible sequence of five letters -- too much for coincidence." McCarter concluded, "It seems probable that we are dealing here not with a coincidental similarity but with a fraud."

Mainfort and Kwas published a further article in American Antiquity in 2004, reporting their discovery of an illustration in an 1870 Masonic reference book giving an artist's impression of how the Biblical phrase "holy to Yahweh" would have appeared in Paleo-Hebrew, which bears striking similarities to the Bat Creek inscription. The General History correctly translates the inscription "Holiness to the Lord," though "Holy to Yahweh" would be more precise. They conclude that Emmert most likely copied the inscription from the Masonic illustration, in order to please Thomas with an artifact that he would mistake for Cherokee. 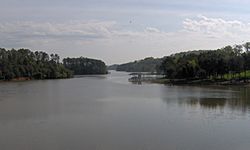 In the 1880s, the Smithsonian Institution team led by John W. Emmert conducted several excavations in the lower Little Tennessee valley, uncovering artifacts and burials related to the valley's 18th-century Overhill Cherokee inhabitants and prehistoric inhabitants. The Tellico Archaeological Project, conducted by the University of Tennessee Department of Anthropology in the late 1960s and 1970s in anticipation of the reservoir's construction, investigated over two dozen sites and uncovered evidence of substantial habitation in the valley during the Archaic (8000–1000 BC), Woodland (1000 BC – 1000 AD), Mississippian (900-1600 AD), and Cherokee (c. 1600-1838) periods. The expedition of Hernando de Soto likely visited a village on Bussell Island at the mouth of the river in 1540 and the expedition of Juan Pardo probably visited two villages further upstream (near modern Chilhowee Dam) in 1567.

The stone consists of "ferruginous siltstone", and measures 11.4 centimetres (4.5 in) long and 5.1 centimetres (2.0 in) wide. The inscription consists of at least eight characters, seven of which are in a single row, and one located below the main inscription, when held with the straighter edge down. A portion of a ninth letter that has broken off remains at the left edge in this orientation. Two vertical strokes in the upper left corner in this orientation were added by an unknown party while the stone was stored in the National Museum of Natural History, sometime between 1894 and 1970, and were not part of the original inscription.

In 1881, the annual appropriation by Congress for the Smithsonian Institution's Bureau of Ethnology specifically designated that some of the funds be "for archaeological investigations relating to mound-builders and prehistoric mounds." Cyrus Thomas, an entomologist by background, was appointed Director of the Mound Survey. According to archaeologist Kenneth L. Feder, "With this funding, Thomas initiated the most extensive and intensive study yet conducted on the Moundbuilder question. The result was more than seven hundred pages submitted as an annual report of the Bureau in 1894 (Thomas 1894). ... He collected over 40,000 artifacts, which became part of the Smithsonian Institution's collection. ... Thomas's work was a watershed, both in terms of answering the specific question of who had built the mounds, and in terms of the development of American archaeology."

In particular, Thomas addressed the question of whether there were pre-Columbian alphabetically inscribed tablets in the mounds, and emphatically concluded, in part on the basis of the body of evidence his study had collected, that there were not. Thomas also "carefully assessed the claim that some of the mound artifacts exhibited a sophistication in metallurgy attained only by Old World cultures. Not relying on rumors, Thomas actually examined many of the artifacts in question. His conclusion: all such artifacts were made of so-called native copper..." Feder concludes, "With the publication of Thomas's Report on the Mound Explorations of the Bureau of American Ethnology, Moundbuilder archaeology had come of age. Its content was so detailed, its conclusions so reasonable that, though not accepted by all, the myth of a vanished race had been dealt a fatal blow."

Thomas did not excavate the mounds himself, but delegated most of the field work to assistants, including John Emmert, who excavated all three Bat Creek mounds in 1889. He concluded that Mound 1 was little more than a shell deposit. Emmert recorded eight burials in Mound 2—one of which included metal "buckles" and a metal button. His excavation of Mound 3 revealed nine skeletons, seven of which were laid out in a row with their heads facing north, and two more skeletons laid out nearby, one with its head facing north and the other with its head facing south. He reported that the Bat Creek Stone was found under the skull of the south-facing skeleton. Along with the stone were two bracelets identified by both Emmert and Thomas as "copper", as well as fragments of "polished wood" (possibly earspools). A 1970 Smithsonian analysis found that the bracelets were in fact heavily leaded yellow brass. In 1988, radiocarbon dating of the wood spools returned a date of 32–769 AD (i.e., the middle to late Woodland period). 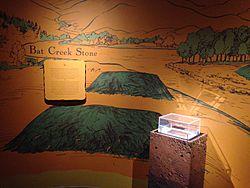 The Bat Creek Stone on display at the Museum of the Cherokee Indian, Cherokee NC

The Bat Creek Stone remains the property of the Smithsonian Institution, and is catalogued in the collections of the Department of Anthropology, National Museum of Natural History, NMNH catalog number 8013771 and original US National Museum number A134902-0. From August 2002 to November 2013, it was on loan to the Frank H. McClung Museum at the University of Tennessee, Knoxville. It has subsequently been loaned to the Museum of the Cherokee Indian in Cherokee, N.C., where it has been on display since 2015.

All content from Kiddle encyclopedia articles (including the article images and facts) can be freely used under Attribution-ShareAlike license, unless stated otherwise. Cite this article:
Bat Creek inscription Facts for Kids. Kiddle Encyclopedia.