The Bath Royal Literary and Scientific Institution (also known as BRLSI) is an educational charity based in Bath, England. It was founded in 1824 and provides a museum, an independent library, exhibition space, meeting rooms and a programme of public lectures, discussion groups and exhibitions related to science, the arts and current affairs.

The early eighteenth century witnessed a vogue for science lecturing in the wake of the pioneering endeavours of scientists such as Isaac Newton, Edmund Halley and Robert Hooke and the founding of the Royal Society in 1662. Bath had long attracted students of chemistry and medicine keen to legitimise claims for the curative properties of its hot spring waters, and soon the patronage of the aristocracy heralded the first wave of the city's Georgian popularity. The first commercial public science (or natural philosophy) lecture was presented by John Theophilus Desaguliers in 1724, explaining the phenomenon of a total eclipse of the sun, which had occurred in May of that year. The lecture may well have been held at Mr. Harrison's Assembly Rooms in Terrace Walk, already becoming a popular venue for the well-heeled visitor to the city. Although it would continue to be host to such itinerant lecturers, it would be another 53 years before the first of Bath's scientific societies was formed.

The Bath and West Society

In 1777 Edmund Rack, the son of a Norfolk labouring weaver, founded the first of Bath's scientific and literary societies. Although partly modelled on the Royal Society of London and other such institutions, Rack was particularly concerned with agricultural and planting improvements in the West Country and so the society would be known as the Bath and West of England Society for the Encouragement of Agriculture, Arts, Manufactures and Commerce (later to become the Royal Bath and West of England Society, its home moving from Bath to Shepton Mallet in 1974 after 196 years with its headquarters in the city). The Bath society published Aims, Rules and Orders and, like its London progenitor, offered prizes or 'premiums' for enterprising projects. These included improvements in areas such as animal husbandry, farm implements and country crafts. Members included William Smith, the 'father of English Geology', whose connections through the society would encourage his geological work in identifying the relationship between rock strata and the distinctive fossils associated with them.

The first of three Philosophical Societies was inaugurated in 1779, founded by Thomas Curtis with Edmund Rack once more at the helm, as secretary. With the aim of being a select Literary Society for the purpose of discussing scientific and philosophical subjects and making experiments to illustrate them, the model for this venture would have been provincial discussion groups such as the Lunar Society. The Bath Philosophical Societies did not quite have the staying power of the Birmingham-based forum and after three incarnations quietly folded. Despite its failure to thrive the society could still boast influential and important subscribers including William Herschel (whose discovery of Uranus was made in 1781 whilst a resident of the city), and Joseph Priestley who at Bowood House in nearby Calne was embarking on his most important scientific investigations on different kinds of air (including his discovery of oxygen). 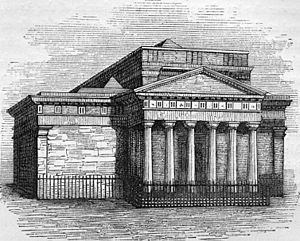 It was in 1824 that the most robust of Bath's literary and scientific societies was founded. Its first home was a grand new building designed by George Allen Underwood on the site of Harrison's Assembly Rooms in Terrace Walk (which had been destroyed by fire in 1820). The Duke of York was the first patron of the Institution and its first president was Marquis of Lansdowne (the son of Joseph Priestley's one-time employer, Lord Sherburne). The first curator of the Institution was William Lonsdale. Lonsdale was a geologist and his study of fossils found in South Devon limestones informed the work of Adam Sedgwick and Roderick Murchison in establishing (after much controversy) the basis for a geological period between the Carboniferous and the Silurian: the Devonian Period. The 'Royal' prefix was added when Queen Victoria continued the patronage bestowed upon the Institution by The Duke of Clarence (later William IV).

Some notable members of the BRLSI

In 1932 the Institution moved to 16–18, the Georgian Queen Square, a Grade I listed Greek Revival building designed by John Pinch the younger in 1830 as a road improvement scheme entailed the demolition of the Terrace Walk.

All content from Kiddle encyclopedia articles (including the article images and facts) can be freely used under Attribution-ShareAlike license, unless stated otherwise. Cite this article:
Bath Royal Literary and Scientific Institution Facts for Kids. Kiddle Encyclopedia.