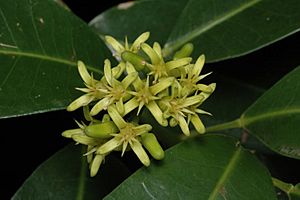 Sarcomelicope simplicifolia, commonly known as bauerella, hard aspen or yellow-wood, is a species of flowering plant in the family Rutaceae and is endemic to eastern Australia including Lord Howe and Norfolk Islands. It is a shrub or small tree with elliptic to egg-shaped leaves arranged in opposite pairs, male or female flowers arranged in small groups in leaf axils and fruit an oval to spherical drupe.

Sarcomelicope simplicifolia subsp. simplicifolia grows in, and on the margins of warmer rainforest from near Mount Carbine area in tropical north Queensland to Mount Dromedary in south-eastern New South Wales. It is also found on Norfolk Island and Lord Howe Island.

The fruit is eaten by a variety of birds, including green catbird and white headed pigeon.

Regeneration from seed is not easily achieved. Seeds should be removed from the flesh, then soaked for a week or two. After six months, around half of these may send out roots and shoots.

All content from Kiddle encyclopedia articles (including the article images and facts) can be freely used under Attribution-ShareAlike license, unless stated otherwise. Cite this article:
Bauerella Facts for Kids. Kiddle Encyclopedia.