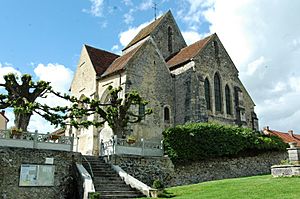 Baulne-en-Brie is a former commune. It is in the Hauts-de-France region in the Aisne department in the north of France. In 2012, 262 people lived there.

On 1 January 2016, it was merged into the new commune Vallées-en-Champagne.

All content from Kiddle encyclopedia articles (including the article images and facts) can be freely used under Attribution-ShareAlike license, unless stated otherwise. Cite this article:
Baulne-en-Brie Facts for Kids. Kiddle Encyclopedia.