The Bay-breasted Warbler (Setophaga castanea) is a small species of songbird in the New World warbler family, Parulidae. It is one of thirty-four species in the diverse genus Setophaga. Like all songbirds, or passerines, the species is classified in the order Passeriformes.

Bay-breasted Warblers breed in the boreal spruce-fir forests of eastern and central Canada, as well as the extreme northern United States. The species winters in the wet lowland forests of northeastern South America and southern Central America, and may be seen during spring and fall migration across the eastern half of the United States in a variety of vegetative communities. Many individuals cross the Gulf of Mexico on their long-distance migration, although some travel north and south along the Mexican shore. 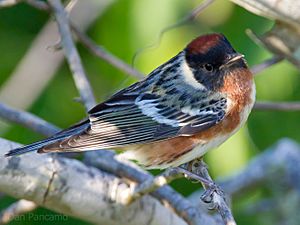 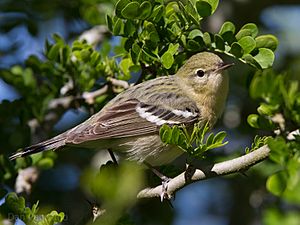 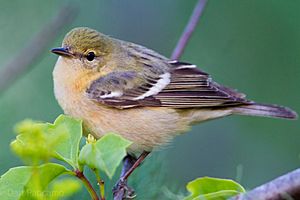 Nests are typically constructed in the lower portion of a spruce or fir tree. The nest is cup-shaped and primarily composed of plant material, with spider silk often utilized as well. Average clutch size is 4-7 whitish eggs with dark spots. The young are altricial at birth, with limited down.

Adult males in breeding plumage are primarily grayish above, with two white wing bars, dark streaks on the back, and a creamy neck patch. The face is black, and the crown, throat, and sides are a dark chestnut color. Breeding females are similar in overall pattern to the males, but are paler and duller. In the nonbreeding season, both sexes gain olive-green feathers on the back, nape, and head. The rufous on the flanks is limited and may even fade away entirely in nonbreeding females. The two white wing bars are present in all plumages.

Although currently classified by the IUCN as Least Concern, Bay-breasted Warblers, like many songbirds, are facing population declines across their range. A loss of insect prey and global climate change are contributing factors to decline. The global population is estimated to be fewer than 10 million individuals.

The genus name Setophaga is from Ancient Greek ses, "moth", and phagos, "eating", and the specific castanea is Latin for chestnut-coloured.

All content from Kiddle encyclopedia articles (including the article images and facts) can be freely used under Attribution-ShareAlike license, unless stated otherwise. Cite this article:
Bay-breasted warbler Facts for Kids. Kiddle Encyclopedia.