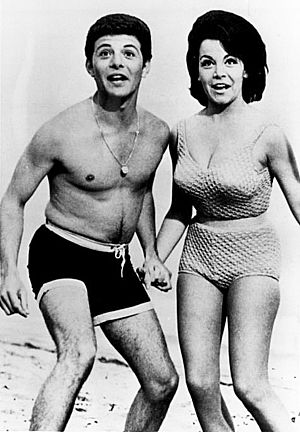 A beach movie or beach party movie is a movie genre. The genre was popular in the late 1950s. It flourished during the early 1960s. The genre was launched in 1959 with Gidget starring Sandra Dee, and came to an end in 1967 with Catalina Caper featuring Tommy Kirk and Little Richard. This movie is generally thought to be the "last gasp" of the genre, the final beach-themed movie.

Beach movies are about happy-go-lucky teenagers frolicking on the sun-drenched beaches of California and Hawaii. Genre elements include girlfriend/boyfriend relationships, motorcycles, cars, food, muscles, bikinis, rock and roll, surf music and surfing. Annette Funicello and Frankie Avalon set the pace for the genre as teen sweethearts in a string of seven beach movies.

All content from Kiddle encyclopedia articles (including the article images and facts) can be freely used under Attribution-ShareAlike license, unless stated otherwise. Cite this article:
Beach movie Facts for Kids. Kiddle Encyclopedia.