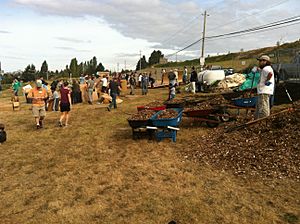 A ground-making event at Beacon Food Forest in 2012

Beacon Food Forest is a 7-acre food forest in development adjacent to Jefferson Park on Beacon Hill in Seattle, Washington in the vicinity of 15th Ave South and South Dakota. By the design of the project, and as the area is on public land, food in the edible forest section of the project will be available freely to those visiting the park. The project also has more traditional private allotments, similar to those in other local P-Patch gardens.

As the area sits on land owned by Seattle Public Utilities, it is believed to be the largest food forest on public land in the United States.

The seven layers of a forest garden

Beacon Food Forest has several goals. One goal is to bring the Beacon Hill neighborhood, a richly diverse community, together in fostering a permaculture tree guild approach to urban farming and land stewardship. Another goal is to provide healthy affordable food to the surrounding community. 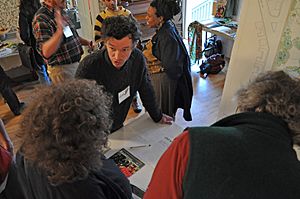 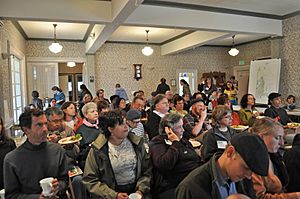 In 2009, an early version of the project, then known as Jefferson Park Food Forest, was presented at OmCulture in Wallingford, Seattle by a design team of four students as a Permaculture Design Course (PDC) final project. The initiative was led by Jacqueline Cramer, a Seattle landscape designer and activist, and Glenn Herlihy, a member of the Jefferson Park Alliance, who was already involved in the community design and outreach process involved with the $8 million Pro-Parks Levy for the reconstruction of Jefferson Park. That course was primarily taught by Marisha Auerbach, Kelda Miller and Jenny Pell with several prominent guest speakers from the local permaculture and raw vegan community. Classes were held at the Raw Vegan Source/New Earth Permaculture Farm in Redmond, at Seattle Tilth at the Home of the Good Shepherd as well as other workshop locations in 2009. Shortly thereafter, the project gained support by the Jefferson Park Alliance and moved toward its planning and development phase.

Heidi Cramer, and Daniel Lorenz Johnson, were also members of the original PDC class design team, A new group, named Friends of Beacon Food Forest, emerged in 2011 during the public outreach phase of the project.

In 2010, a $20,000 City of Seattle Department of Neighborhoods Small and Simple Neighborhood Matching Fund (NMF) grant was provided to hire a design team to come up with a design based on input from three public design workshops. The design team selected included Margarett Harrison, a landscape architect with Harrison Design, and Jenny Pell, a permaculture designer with Permaculture Now!. In December 2011 the project received $100,000 from the Department of Neighborhoods to begin phase one of the food forest plan.

In order to best make sure the project reflected the surrounding community and to garner support from the City of Seattle, the project team worked to secure neighborhood support. Over 6,000 postcards were distributed in five different languages. The group posted fliers, tabled at local events such as the local farmer's market and fairs. The effort was relatively successful based on the diversity of workshop attendees and the group also garnered significant response from local permaculturalists as well as others involved in community gardener and ecologically conscious groups.

More than 70 people, mostly from Beacon Hill, attended the second meeting in mid-July, where proposed designs were laid out on giant sheets paper with markers strewn about so the community could scribble their ideas and feedback directly onto the plans. A dozen elderly Chinese women participated with the help of a translator hired by Friends of the Food Forest. Some neighbors praised the idea, while others shared deep concerns over vandals, theft, and management. More than anything else, the enthusiasm to get to work was palpable.

The project started to receive a significant amount of publicity, even before groundbreaking, in February and March 2012, including coverage by the Associated Press, National Public Radio and had a significant place in the monologue of The Late Late Show with Craig Ferguson, who joked that "in downtown LA they are talking about building a forest like this one in Seattle but instead of looking for berries its kinda like a petting zoo, you get to hand feed Kardashians".

The main interest appeared to be the unique aspects of a food gardening, the prospect of gleaning food from the forest garden section of the project and the uniqueness of the project being on public land.

All content from Kiddle encyclopedia articles (including the article images and facts) can be freely used under Attribution-ShareAlike license, unless stated otherwise. Cite this article:
Beacon Food Forest Facts for Kids. Kiddle Encyclopedia.