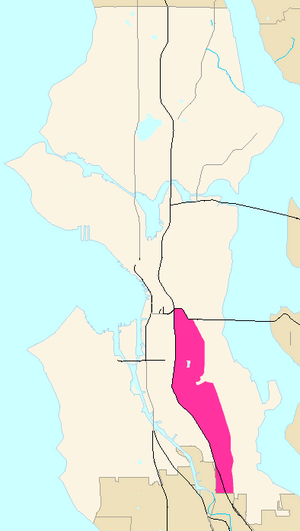 Beacon Hill is a hill and neighborhood in southeast Seattle, Washington. The municipal government subdivides it into North Beacon Hill, Mid-Beacon Hill, Holly Park, and South Beacon Hill, though most people who live there simply call it "Beacon Hill." Former home to the world headquarters of Amazon.com and present home to the Seattle Division of the Department of Veterans Affairs' Puget Sound Health Care System, the hill offers views of downtown, the Industrial District, Elliott Bay, First Hill, Rainier Valley, and, when the weather is good, Mount Rainier and the Olympic Mountains. It is roughly bounded on the west by Interstate 5, on the north by Interstate 90, on the east by Rainier Avenue South, Cheasty Boulevard South, and Martin Luther King Junior Way South, and on the south by the Seattle city boundary. It is part of Seattle's South End. Homes on the northern part of the hill were mostly built in the early 1900s; thus, North Beacon Hill contains many excellent examples of Craftsman bungalows and Seattle box houses, a local variant of the Foursquare style.

The American Planning Association (APA), an organization of "planners, citizens and elected officials - committed to making great communities happen", named Beacon Hill as one of the 30 Great Places in America. The features of Beacon Hill that constitute an APA Great Place include urban design and aesthetics, multi-modal transportation, a variety of uses within the neighborhood, sustainability, community participation and involvement, and memorable character. Beacon Hill was also recognized for having the largest Olmsted-planned green space in Seattle, known as Jefferson Park. The neighborhood is highly treasured by its businesses and residents, and the neighborhood is highly involved in local planning affairs such as open space, public safety, and transportation.

The Beacon Hill neighborhood prides itself on many fine foods and restaurants, a highly rated hair salon, the best live music venue, and a place for kids activities, all voted for as some of the "Best of 2012" by Seattle Magazine (online version not currently available). The City of Seattle, in partnership with Beacon BIKES, created the Beacon Hill Family Bicycle and Pedestrian Circulation Plan, a ten-year plan to increase pedestrian bicycle networks serving highly used greenways, intersections, and cycle tracts within the neighborhood as a measure to increase safety for all users. The plan was awarded the 2012 VISION 2040 Award from the Puget Sound Regional Council.

Beacon Hill is home to the "Beacon Rocks!" performance series, beginning its 5th season in 2014 on the last Sunday of June, July and August. This event featuring a variety of types of performances is held on the Roberto Maestas Festival Street and produced by Beacon Hill's neighborhood community arts group "ROCKiT Community Arts".

Beacon Hill has recently become known for their Food Forest, a new project that has created neighborhood urban farming west of Jefferson Park. The Beacon Food Forest has gained national attention in the news, receiving recognition from the Associated Press, CBS, Gawker, and HLN, to name a few. A 2012 article in Seattle Weekly stated that Beacon Hill was soon to "boast the biggest public food forest in the country" with seven lush acres containing a community park and an edible landscape, including such plantings as walnuts, chestnuts, berry shrubs and vegetables. The idea started with a community-led group that secured $22,000 in Neighborhood Matching Funds from the Department of Neighborhoods. 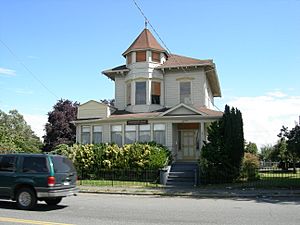 The Turner-Koepf House is on the National Register of Historic Places.

The Duwamish called the hill "Greenish-Yellow Spine" (Lushootseed: qWátSéécH), probably referring to the color of the deciduous trees that once grew thickly on the hill. Early settlers named it Holgate and Hanford Hill after two early settlers, John Holgate and Edward Hanford, who settled in the area in the 1850s and are commemorated to this day by South Holgate and Hanford Streets on North Beacon Hill. A later arrival, M. Harwood Young, named the hill after the Beacon Hill in his hometown, Boston, Massachusetts.

Beacon Hill was nicknamed "Boeing Hill" in the 1950s and 60s due to the number of residents who worked in the nearby [Boeing] airplane factory. The term fell out of use when many Boeing employees joined the general exodus to the suburbs, and Asian immigrants took their place. Today the neighborhood is majority Asian, as can be seen by the many Chinese, Vietnamese, and Filipino businesses along Beacon Avenue South. However, the area remains racially diverse, as shown by the United States 2000 Census: 51% Asian, 20% white, 13% black, 9% Hispanic/Latino and 7% other. The census also showed the total Beacon Hill population to be 22,300. Neighboring Rainier Valley also shows a similar diversity. 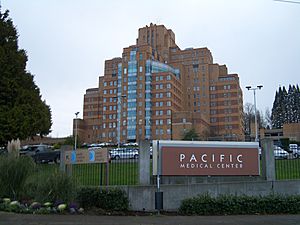 All content from Kiddle encyclopedia articles (including the article images and facts) can be freely used under Attribution-ShareAlike license, unless stated otherwise. Cite this article:
Beacon Hill, Seattle Facts for Kids. Kiddle Encyclopedia.