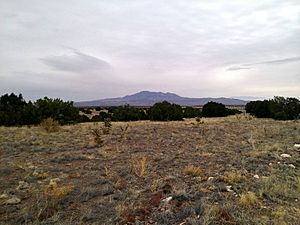 Looking east from the Scott Mesa Inventoried Roadless Area in the Bear Mountains.

Robert Julyan's The Place Names of New Mexico notes that "bear" names throughout New Mexico frequently come from a particular incident with a bear rather than a general abundance of bears because "any encounter with a bear likely would have been memorable." Even so, the range is currently home to black bears, and grizzly bears were once found the area as well.

Basham noted in his report documenting the archeological history of the Cibola's Magdalena Ranger District that “[t]he heritage resources on the district are diverse and representative of nearly every prominent human evolutionary event known to anthropology. Evidence for human use of district lands date back 14,000 years to the Paleoindian period providing glimpses into the peopling of the New World and megafaunal extinction.“ Much of the now Magdalena Ranger District was a province of the Apache. Bands of Apache effectively controlled the Magdalena-Datil region from the seventeenth century until they were defeated in the Apache Wars in the late nineteenth century.

Due to the absence of major light pollution, the Bear Mountains provide outstanding stargazing opportunities. The area also offers phenomenal hiking, backpacking, camping, hunting, and horseback-riding. As Robert Juylan points out in The Mountains of New Mexico, the range is rather popular among birdwatchers because of the various springs in the region.

Wildlife in the Bear Mountains

All content from Kiddle encyclopedia articles (including the article images and facts) can be freely used under Attribution-ShareAlike license, unless stated otherwise. Cite this article:
Bear Mountains Facts for Kids. Kiddle Encyclopedia.