Originally a French farming community, Beaumont is now a town of 17,720 people. Its downtown core resembles a French village with unique architecture and red brick walkways. It is named for the "beautiful hill" on which St. Vital Church, built in 1919, is located within the centre of the town. The name was selected in 1895 as part of a petition for a post office. 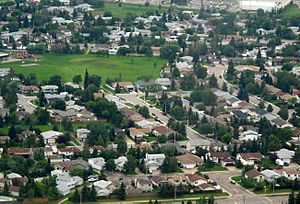 Beaumont from the air

Beaumont is home to the Beaumont Blues Festival, one of only a few all-Canadian blues festivals in Canada. Headliners of the 2010 festival included Amos Garrett, Gordie Johnson and Kelly Hoppe of Big Sugar, Boogie Patrol, and Paul Pigat.

All content from Kiddle encyclopedia articles (including the article images and facts) can be freely used under Attribution-ShareAlike license, unless stated otherwise. Cite this article:
Beaumont, Alberta Facts for Kids. Kiddle Encyclopedia.