The lac Beauport is a body of water located north of Quebec, surrounded by the municipality of Lac-Beauport, in the La Jacques-Cartier Regional County Municipality, in the region of Capitale-Nationale, in the province of Quebec, in Canada. It covers an area of 0.8 square kilometres (0.31 sq mi), at a maximum depth of 13 meters. The lake outlet flows into the Jaune River.

Lac Beauport is mainly served by the Chemin du Tour du Lac and some secondary roads for the needs of recreational tourism activities (especially vacationing) and forestry. 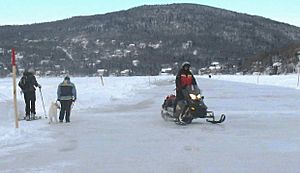 The lake is heavily used, summer and winter. During winter, skating rinks are set up there.

The lake is supplied by four main tributaries, two of which are intermittent. It then pours into the Jaune River. Between the lake and the river, a small dam controls the level of the lake.

Concentrations of phosphorus increased to a maximum in 1999 (19 mg/l) and then fell again in 2005 (7 mg/l). Transparency decreased in the early 2000s before returning in 2009 to a level similar to that of 1978. In recent years, the water in Lake Beauport was generally of very good quality and the parameters measured meet the quality criteria for the practice of recreational activities and the preservation of aquatic life, except for the level of aluminum, exceeding standards in 1999.

Summer and winter, the lake is very busy with human activity. The shores of the lake are occupied and privatized and the only public access to the lake is the Municipal Nautical Club of Lac-Beauport. The main attractions are swimming, fishing for bass and speckled trout and boating. In winter, the frozen surface of the lake hosts the Quebec Pond hockey Championship.

All content from Kiddle encyclopedia articles (including the article images and facts) can be freely used under Attribution-ShareAlike license, unless stated otherwise. Cite this article:
Beauport Lake Facts for Kids. Kiddle Encyclopedia.