Bee and PuppyCat facts for kids

Bee and PuppyCat is an American animated web series created and written by Natasha Allegri and directed by Larry Leichliter. The series revolves around Bee (voiced by Allyn Rachel), an unemployed woman in her early twenties, who encounters a mysterious creature named PuppyCat (voiced by the Vocaloid program Oliver). She adopts this apparent cat-dog hybrid, and together they go on a series of temporary jobs to pay off her monthly rent. These bizarre jobs take the duo across strange worlds out in space. The show is produced by Frederator Studios and is animated by Dong Woo Animation in South Korea and OLM, Inc. in Japan.

The series originated with a web pilot in 2013, followed by a Kickstarter supported first season which was released from 2014–16. It will continue with a second season titled Bee and PuppyCat: Lazy in Space. The first Season 2 episode made its debut at Samari the Ottawa International Animation Festival on September 26, 2019. KaBoom! Studios published a comic book adaptation from 2014–16.

In October 2020, it was announced that the show's second season, which had been leaked on-line in its entirety in January of that year, is scheduled for a release sometime in 2022 on Netflix.

Bee is a cheerful young woman in her early twenties who is habitually fired from menial, low-paying jobs. On her way home from a failed job opportunity, PuppyCat, a strange, mysterious creature, falls from the sky. She takes him in and, when he sees that she is broke and unemployed, PuppyCat teleports himself and Bee to an alternate dimension where they are given a job by TempBot, a gigantic, intelligent television screen. Despite the dangers that this line of temporary jobs would pose, Bee finds that she has a talent for the work and that it pays well enough for her to disregard the dangers.

An ongoing plot element of the series is PuppyCat's past, which is shrouded in mystery. There are hints that he may be a space outlaw who was transformed by the Space King, who was angry over the pirate's romance with his daughter. However, due to his anger, the magic meant to capture him instead turned him into a monster and he escaped. Another ongoing plot element is Bee's romantic feelings for her friend Deckard, a talented chef who seems to harbor a crush on Bee but finds that this complicates his decision to pursue a cooking career.

In the episode "Donut" it's revealed that Bee is a cyborg, a revelation that stuns Deckard. At the end of the episode he chooses to leave home to attend culinary school, still conflicted over the revelation and his feelings for Bee. 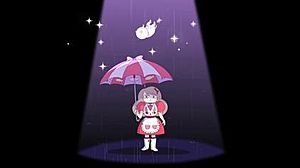 A screenshot from the first pilot episode of Bee and PuppyCat. PuppyCat is falling from the sky and is about to land on Bee.

The series began as a two-part episode, which was uploaded to Frederator Studios' YouTube channel Cartoon Hangover as two 5-minute shorts as part of Too Cool! Cartoons, a project Frederator referred to as an "big idea cartoon incubator". Part one went online on July 11, 2013, while part two and a video with both parts together went online on August 6, 2013.

After gaining popularity online, Cartoon Hangover started its first Kickstarter project in order to fund additional episodes. The Kickstarter started on October 15, 2013, and achieved its US$600,000 goal with 6 days left; by the end, it had raised $872,133, funding ten 6-minute episodes, the first of which would air in the summer of 2014. At that time, Bee and PuppyCat became the most successful animation Kickstarter in history, #4 in the film/video category (behind only three Hollywood-based projects), and the #1 Kickstarter based on a YouTube video. Bee and PuppyCat: The Series premiered November 6, 2014 with a second two-part episode. While a few episodes were released early to Kickstarter backers in 2015, the majority of the season was released through 2016, with production concluding in March that year. The second half of the season was planned for a YouTube release in late Spring/early Summer 2016 but were released November 11, 2016 on VRV instead. The complete first series was eventually uploaded in full to the Cartoon Hangover YouTube channel on December 1, 2018.

In March 2017, Frederator announced that new episodes of Bee and PuppyCat were being written. In June 2018, the trailer for the continuation was released under the title Bee and PuppyCat: Lazy in Space, which would have aired sometime in 2019 but this was delayed. The first episode was released in September 2019 at the Ottawa International Animation Festival, and the full season was leaked onto Fred Seibert's Vimeo channel in early 2020. The episodes were later removed from the platform, but not before several streaming websites managed to obtain copies. Seibert stepped down from his position as CEO of Frederator in August, though the company indicated that he would remain executive producer for current projects, including Bee & PuppyCat. In October, it was announced that Netflix would be distributing the season in 2022.

Boom! Studios published a tie-in comic book through its KaBOOM! imprint. The comic was canceled after #11 in 2016 despite issues #12–#16 having already been solicited. Preview catalogues that year listed issues #12–#16, along with cover art and synopses.

All content from Kiddle encyclopedia articles (including the article images and facts) can be freely used under Attribution-ShareAlike license, unless stated otherwise. Cite this article:
Bee and PuppyCat Facts for Kids. Kiddle Encyclopedia.