Vocaloid is a software program that makes a voice. It was created by Yamaha, a company that sells musical instruments. The user can type in lyrics and a melody and it will synthesize singing. Many companies make Vocaloids, but the company with the most popular Vocaloids is Crypton Future Media. Most companies sell their Vocaloids to the public, but some companies don't. Anybody can use Vocaloid, so many people make songs with it. People can listen to songs made with Vocaloid on websites like YouTube. Some people also sell songs they've made with Vocaloid on CDs. 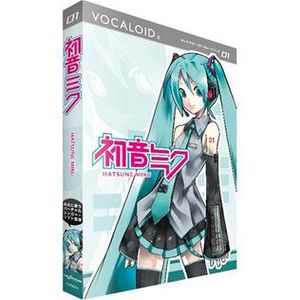 Most Vocaloids have a character associated with their voice. When people talk about "a Vocaloid", they are usually talking about both the character and the voice. The most popular Vocaloid is Hatsune Miku. She is very popular in Japan. Other popular Vocaloids are Kagamine Rin, Kaito, and Gumi. Most Vocaloids are made to sing in the Japanese language, but some sing in other languages like English or Spanish. An example of an English Vocaloid would be Oliver.

A man named Kenmochi Hideki was the first person to think of Vocaloid. He asked Yamaha, a music company, to help him make Vocaloids. English and Japanese versions of Vocaloid were developed at the same time. Vocaloid took years to make. It was very difficult to make the Vocaloids sound human. The first Vocaloids were Leon and Lola, who sang in English. They were released in 2004. They were a success but were not very popular.

Later, Yamaha updated the Vocaloid software and called it VOCALOID2. The first Japanese Vocaloid for VOCALOID2 was Hatsune Miku. Miku was made by the company Crypton Future Media, Inc. When Crypton announced Hatsune Miku in 2007, she became a sensation on the popular Japanese website Nico Nico Douga, which is a lot like YouTube. Some people think that Miku got so popular because she has an attractive or cute mascot.

Miku then became popular all across Japan, and in other places around the world. Other companies noticed how popular Miku was. This made other companies want to make Vocaloids, too. Now there are a lot of Vocaloids. The software is very popular in lots of places now.

All content from Kiddle encyclopedia articles (including the article images and facts) can be freely used under Attribution-ShareAlike license, unless stated otherwise. Cite this article:
Vocaloid Facts for Kids. Kiddle Encyclopedia.