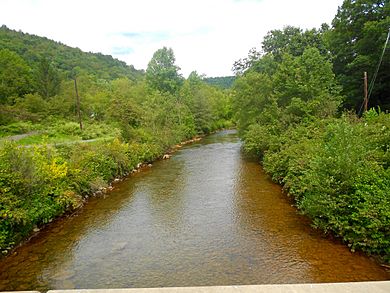 Beech Creek is a 27.3-mile-long (43.9 km) tributary of Bald Eagle Creek in Centre and Clinton counties, in Pennsylvania in the United States.

Beech Creek is born at the confluence of the North and South Forks, 3.5 miles (5.6 km) upstream of Kato, and flows for 27.3 miles (43.9 km) to join Bald Eagle Creek, 1.8 miles (2.9 km) downstream of the borough of Beech Creek. The abandoned grade of the Beech Creek Railroad follows it along its length, running from its mouth up to the North Fork.

At one time it was called North Branch of the Bald Eagle. It was a thoroughfare for the lumber industry, which made canals alongside the stream so it could be useful during the low water season of summer. There are 3 towns alongside it: Beech Creek borough, and 2 villages: Orviston (Centre County), and Monument (Centre and Clinton Counties).

The lower half of the creek has no fish in it due to sulfur that ran into it from coal industry times. The creek is not clearing up as fish can't survive in the water for more than 45 minutes. However, some small amounts of moss, mushrooms and wildlife on the banks are returning. Frogs, wolf spiders, bears, squirrels, snakes, groundhogs, bald eagles, deer, skunks, and many other Pennsylvania wildlife can be found alongside the stream especially in its upper region. Animals tend to avoid drinking the water, but favor the contributing tributaries. Additionally, on Beech Creek Mountain, one can find active sulfur springs. Evidence is available on Sproul State Forest (41.111978, -77.664207). The south fork of the Beech Creek stream which flows in Centre County gets stocked with trout every year.

The stream is abundant with sand stones, flint and granite, though in some spots clay can be found. Beech, oak, maple, ash, trembling willow and sumac trees grow along with elephant ear tall grass, fern, barberry and other plants like skunk cabbage. The stream is a good swimming stream but in certain spots it is posted,

All content from Kiddle encyclopedia articles (including the article images and facts) can be freely used under Attribution-ShareAlike license, unless stated otherwise. Cite this article:
Beech Creek (Pennsylvania) Facts for Kids. Kiddle Encyclopedia.