Beitbridge is a border town in the province of Matabeleland South, Zimbabwe. The name also refers to the border post and bridge spanning the Limpopo River, which forms the political border between South Africa and Zimbabwe.

The town lies just north of the Limpopo River about 1 km from the Alfred Beit Road Bridge which spans the Limpopo River between South Africa and Zimbabwe. The main roads are the A6 highway to Bulawayo and Victoria Falls, being 321km and 758km away respectively and the A4 to Masvingo and Harare. According to the 2002 population census, the town had a population of 22,387 dominated by the Venda and Ndebele people of this region. There is a small percentage of other people from other provinces because this is a busy border post with traders from all over Zimbabwe. The Beitbridge border post is the busiest road border post in Southern Africa, and is best avoided during busy border-crossing seasons.

The major sources of local employment - freight, retail, construction, customs and the police - employ about 1,200 people. Informal sector activity - primarily vending - is as large as those in the formal sector, employing about 1,400. Outside Beitbridge town, farming is a major employer. A diamond mine recently closed, increasing unemployment and poverty. Most women rely on vending and cross-border trading for income. Truckers are present in the area with work coming from the border area of South Africa.

The Alfred Beit Road Bridge is named after Alfred Beit, founder of the De Beers diamond mining company and business associate of Cecil Rhodes. He was also a director of a number of companies, among them the British South Africa Company and Rhodesia Railways. The original bridge was constructed in 1929 at a cost of $600,000 and financed jointly between the Beit Railways Trust and the South African Railways. The new bridge was completed in 1995, and was officially opened on 24 November. It was built by the Zimbabwean Government, which now benefits from the tolls levied on crossings. The new bridge can accommodate much heavier traffic than the old one could, which is now for rail traffic only. 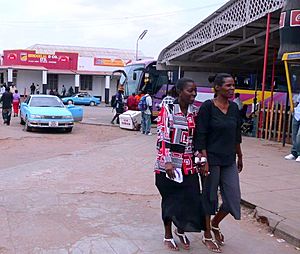 Residents the town of Beitbridge, 2006

On the South African side of the border the N1 Highway connects this border post to the main economic centres of Pretoria (463 km) and Johannesburg (521 km). The closest town is Musina (16 km). On the Zimbabwean side of the border post the road splits in two, with the A6 running to Bulawayo and the R1 to Masvingo. A railway also passes through this border post, side by side with the road, and splits into a line to Bulawayo and a line to Gweru via Rutenga.

Three railway lines meet at Beitbridge: the South African Spoornet line to Polokwane, the National Railways of Zimbabwe line to Gweru via Rutenga and the Beitbridge Bulawayo Railway.

Dulivhadzimu Stadium, a small multi-purpose arena in the town was chosen by the ZANU-PF led 21st February Movement to host the annual national celebration of Robert Mugabe's date of birth on Saturday, 23 February 2008. On 21 February, two days before, Mugabe had turned 84. It was reported that workers repaired the potholes on the main roads in the city to make sure Mugabe's motorcade moved swiftly with a measure of comfort.

All content from Kiddle encyclopedia articles (including the article images and facts) can be freely used under Attribution-ShareAlike license, unless stated otherwise. Cite this article:
Beitbridge Facts for Kids. Kiddle Encyclopedia.