The Bell Site (also known as 47 Wn-09) is located on the south side of Big Lake Butte des Morts in Winnebago County, Wisconsin, about 52 miles southeast of Green Bay. The site is classified as an early (c. 1600-1750 AD) Historic village of the Fox tribe.

The Bell Site was first discovered in 1911 when gravel mining operations uncovered the burial of an Indian chief and his horse. In the 1950s the site came to the attention of professional archaeologists. Mixed historic and prehistoric materials were being found by collectors, and the pottery was unlike any previously found at archaeological sites in Wisconsin. It was hypothesized that this site could be a village of a Central Angonkian tribe (native to Michigan or Ontario) which had been displaced in the 1600s during the Iroquois wars. Further research in the Wisconsin Historical Collections revealed that early French explorers had recorded a village of the Fox tribe at the location of the site.

In 1959 evacuations took place with the joint efforts of the State Historical Society, the Wisconsin Archaeological Survey and the Oshkosh Public Museum, under the direction of Warren L. Wittry of the Cranbrook Institute of Science.

Features identified at the site include: 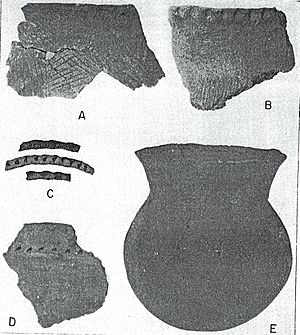 Four pottery types were noted at the site:

Archaeologists have found great difficulty in identifying the material culture of the Great Lakes Indian tribes and tracing it back to prehistoric times. At the time of European contact, tribes were moving around and becoming displaced due to conflicts such as the Iroquois wars, as well as the changing economic patterns brought about by the fur trade. As a result, it's difficult for archaeologists to place tribes accurately in their prehistoric homeland. Furthermore, after contact with Europeans, the tribes traded for items such as brass kettles and steel knives which replaced the native pottery and stone tools. Thus, the material culture vanished and in many cases created a disconnect in the archaeological record between the prehistoric and historic periods.

With the discovery of the Bell site, for the first time Fox material culture could be observed in an intact early historic context. The Bell Site Type 1 pottery style can be attributed to the Fox tribe with confidence since it is the predominant pottery type present at the site. Subsequently, excavations at a known Potawatomi site (Rock Island) yielded Bell Site Type II pottery, which indicates that pottery type was manufactured by the Potawatomi. In both cases, this was the first time that specific pottery styles could be attributed with confidence to either tribe.

All content from Kiddle encyclopedia articles (including the article images and facts) can be freely used under Attribution-ShareAlike license, unless stated otherwise. Cite this article:
Bell Site (Wn9), Wisconsin Facts for Kids. Kiddle Encyclopedia.