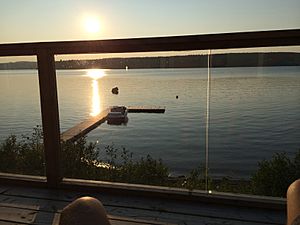 Species of fish common to the area include, among others: 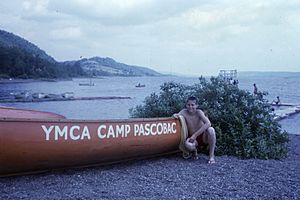 Camp Pascobac camper with Belleisle Bay in the background (ca. 1965).

The bay is oriented northeast from the river, which it joins at the head of Long Reach, just south of the village of Evandale. Belleisle Bay forms part of the northern boundary of southern New Brunswick's "Kingston Peninsula", with the southern boundary being the Kennebecasis River.

Belleisle Bay has little current as it has few freshwater inlets and acts more-or-less as a lake in a glacial valley, framed by the low rolling hills of the St. Croix Highlands of the Appalachian range. Although the bay is mostly freshwater, the entire lower Saint John River system has a limited saltwater tidal influence resulting from the Reversing Falls. Its waters freeze completely in the winter months.

The bay is located entirely within Kings County. The Belleisle Bay Ferry, a year-round cable ferry, crosses the bay between Earle Wharf and Long Point.

All content from Kiddle encyclopedia articles (including the article images and facts) can be freely used under Attribution-ShareAlike license, unless stated otherwise. Cite this article:
Belleisle Bay Facts for Kids. Kiddle Encyclopedia.