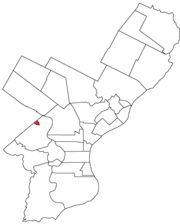 Belmont Village is a middle class neighborhood located in the West Philadelphia section of Philadelphia, Pennsylvania. The zip code is 19131.

Known as Blockley in the early 1900s, when developers first built homes in the area, the region now comprises Overbrook, Wynnfield, Belmont Village, and Wynnefield Heights. In Belmont Village, the homes are stone-faced on Lenape Road and on nearby Conshohocken Avenue, the homes have an opulent Spanish Revival-style.

In the early 20th-century, John McClatchy shaped the look of many Philadelphia neighbors, including Belmont Village. McClatchy advertised the development at the time as located in Bala, and it is close to Bala station on the Cynwyd Regional Rail line, but it’s actually in the city’s Belmont Village section.

Belmont Village encompasses the area from City Avenue to the north, Fairmount Park to the south, the Bala Golf Club to the west, and Belmont Avenue to the east.

Belmont Village is accessible to Center City via West River Drive and SEPTA’s Cynwyd Line. The Bala Station sits directly across the street from the northern end of Belmont Village. The neighborhood is also accessible to several major roadways such as Route 1, I-76, and I-95.

Along Belmont Village's southern border is Fairmount Park, which contains points of interest such as the Carousel House and the Mann Center for the Performing Arts. Nearby East Parkside is home of the Philadelphia Zoo and Memorial Hall/Please Touch Museum.

Every July, the Greek Picnic draws over 100,000 people to an adjacent area of Fairmount Park, celebrating African-American college fraternities and sororities.

Belmont Village is served by the Philadelphia School District. Students in the neighborhood attend William B. Mann Elementary School. In May 2010, after years of failing to meet state standards, the School District turned operation of Mann over to Mastery Charter Schools. Mann will continue to be run as a neighborhood school and is one of Mastery's first elementary schools.

Belmont Village is close to a number of private elementary and secondary schools, including Friends' Central School on City Avenue. Two colleges also flank Belmont Village, the Philadelphia College of Osteopathic Medicine (PCOM) to the east and Saint Joseph's University to the west.

All content from Kiddle encyclopedia articles (including the article images and facts) can be freely used under Attribution-ShareAlike license, unless stated otherwise. Cite this article:
Belmont Village, Philadelphia Facts for Kids. Kiddle Encyclopedia.