Kids Encyclopedia Facts
Not to be confused with Belvoir Castle. 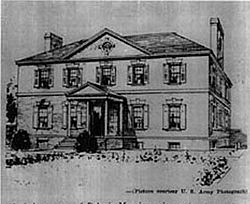 Belvoir Mansion: Artist's conception of the building before its destruction.

Belvoir was the agricultural forced labor camp and estate of colonial Virginia's prominent William Fairfax family. Built with the forced labor of enslaved people, it sat on the west bank of the Potomac River in Fairfax County, Virginia, at the present site of Fort Belvoir. The main house — called Belvoir Manor or Belvoir Mansion — burned in 1783 and was destroyed during the War of 1812. The site has been listed on the National Register of Historic Places since 1973 as "Belvoir Mansion Ruins and the Fairfax Grave."

William Green's 1669 patent for 1,150 acres (4.7 km2) encompassed most of the peninsula between Dogue Creek and Accotink Creek, along the Potomac River. Although this property was sub-divided and sold in the early 18th century, it was reassembled during the 1730s to create the central portion of Col. William Fairfax's 2,200-acre (8.9 km2) plantation of Belvoir Manor.

Fairfax's elegant new home was completed in 1741. Historic documents and archeological artifacts found at Belvoir Manor both attest to the elegant lifestyle enjoyed by the Fairfax family, thanks to their enslavement of others. The mansion was described in a 1774 rental notice as spacious and well-appointed. Its furnishings consisted of "tables, chairs, and every other necessary article...very elegant." The family imported ceramics from Europe and the Orient to grace its tables.

Planters such as William Fairfax comprised a small elite of Fairfax County's population; most of their neighbors were smaller farmers who sometimes barely managed to make a living. The affluence of such planters was based not only on land and imposing buildings, but on the number of people they enslaved. These people are in the records as chattel passed from one generation to another, and as the probable users of the plain unglazed ceramics found in the outbuildings of Belvoir Manor. After William Fairfax's death in 1757, the plantation passed to his eldest son George William Fairfax (1729–87).

Thomas Fairfax, 6th Lord Fairfax of Cameron, moved to Virginia between 1735 and 1737 to inspect and protect his lands. Lord Fairfax came to Belvoir, to help oversee his family estates in Virginia's Northern Neck Proprietary between the Rappahannock and Potomac rivers, inherited from his mother, Catharine, daughter of Thomas Culpeper, 2nd Baron Culpeper of Thoresway; and a great portion of the Shenandoah and South Branch Potomac valleys. The northwestern boundary of his Northern Neck Proprietary was marked by the Fairfax Stone at the headwaters of the North Branch Potomac River.

In 1752, Lord Fairfax moved to Greenway Court in the valley of Virginia closer to his undeveloped land. He hired George Washington to survey land at Belvoir.

When Fairfax left Belvoir for England in 1773, he had the estate rented to Rev. Andrew Morton for seven years. Its furnishings were sold at auction in 1774. It was confiscated during the American Revolutionary War by the Virginia Act of 1779. In 1783, the mansion and several of its outbuildings were destroyed by fire, and the plantation complex gradually deteriorated into ruins. Ferdinando Fairfax, who inherited the property, apparently did not live there. The bluffs below the former mansion site were quarried for building stone, but the house site was not developed.

Belvoir Plantation suffered further damage during the War of 1812. In August 1814, as British land forces attacked and burned the city of Washington, a British naval squadron sailed up the Potomac River and forced the surrender of Alexandria. The fleet began the 180-mile (290 km) return trip down river. On September 1, the British attempted to run the deep-water channel below the Belvoir house site, a position that previously had been identified as a strategic defensive location on the river. A hastily assembled American force, composed of Virginia and Alexandria militia under the command of U.S. Navy Captain David Porter, hurriedly began to mount a battery on the bluff above the river. For four days, British and American forces exchanged cannon and musket fire. The British fleet eventually passed the American positions, but British shells demolished what little was left of the old Belvoir Manor.

The association of Belvoir Plantation with the Fairfax family ended with the death of Ferdinando Fairfax in 1820. During the next decade, William Herbert of Alexandria acquired the property, which he quickly used as collateral for a loan. During the 1830s, Thomas Irwin, Herbert's creditor, operated the shad fisheries at White House Point. Herbert's continued inability to pay his debts eventually led to the sale of Belvoir at public auction in 1838.

All of the great 18th-century plantations in the Belvoir area changed considerably in the years before the Civil War. Soil exhaustion and inheritance prompted the sale and sub-division of these formerly expansive tracts of land. As a new generation of landowners took up residence in southeastern Fairfax County, patterns of land use and ownership were altered.

In 1917, the Belvoir property was consolidated and ceded to the U.S. Army by Virginia, eventually lending its name to the modern military installation of Fort Belvoir.

The Belvoir ruins are on the National Register of Historic Places (1973), but access is restricted since they are on the military post.

All content from Kiddle encyclopedia articles (including the article images and facts) can be freely used under Attribution-ShareAlike license, unless stated otherwise. Cite this article:
Belvoir (plantation) Facts for Kids. Kiddle Encyclopedia.