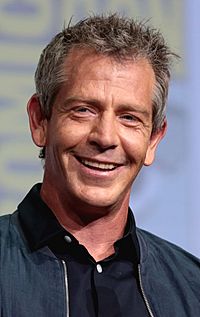 Paul Benjamin "Ben" Mendelsohn (born 3 April 1969) is an Australian movie, television, stage and voice actor. He is known for his roles as Andrew "Pope" Cody in Animal Kingdom, Russell in Killing Them Softly, John Daggett in The Dark Knight Rises, Orson Krennic in Rogue One, King George VI in Darkest Hour and as Nolan Sorrento in Ready Player One.

Mendelsohn was born on 3 April 1969 in Melbourne, Victoria. He was married to Emma Forrest since 2012.

All content from Kiddle encyclopedia articles (including the article images and facts) can be freely used under Attribution-ShareAlike license, unless stated otherwise. Cite this article:
Ben Mendelsohn Facts for Kids. Kiddle Encyclopedia.