He has also played ice hockey in college at Boston College with the Eagles. He made his NHL debut with the Blackhawks on October 29, 2010 against the Edmonton Oilers. He scored 2 goals on April 15, 2011 against the Vancouver Canucks in his second NHL playoff game.

On April 24, 2011, Smith scored the overtime goal on a rebound by Niklas Hjalmarsson against the Vancouver Canucks' goaltender, Roberto Luongo, to force a Game 7 in Vancouver. On June 24, 2013, He won the Stanley Cup with the Blackhawks after they defeated the Boston Bruins 4 games to 2 in the 2013 Stanley Cup Finals.

On March 2, 2015, the Blackhawks traded Smith to the San Jose Sharks in exchange for Andrew Desjardins.

On February 27, 2016, Smith, Alex Stalock and a conditional 4th round pick in 2018 were traded by the Sharks to the Toronto Maple Leafs in exchange for James Reimer and Jeremy Morin.

Despite putting up acceptable numbers with the Maple Leafs, Smith was placed on waivers by the team on March 30, 2016. Smith cleared the following day and was assigned to the Toronto Marlies of the AHL. Despite being considered to be favourites to win the Calder Cup, the Marlies were eliminated in the third round of the playoffs, with Smith contributing nine points in their fifteen-game run. 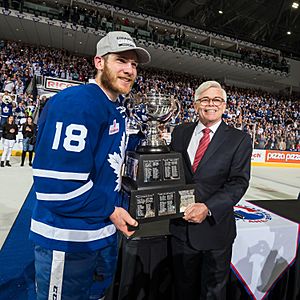 On August 16, 2016, he signed a one-year, two-way deal with the Colorado Avalanche, worth $675,000 at the NHL level and $150,000 at the AHL level. Having made the Avalanche opening night roster, Smith made his debut with Colorado to start the 2016–17 season in a 6–5 victory over the Dallas Stars on October 15, 2016. Smith would play in four scoreless games for the Avalanche before being placed on waivers and being claimed by the Toronto Maple Leafs on October 24, 2016. Smith was claimed due to the depth he provided the team on the penalty kill, a position coach Mike Babcock praised him for during his stint the previous season in Toronto.

On May 2, 2017, Smith agreed to a one-year extension to remain with the Maple Leafs. In the 2017–18 season, he won the Calder Cup with the Toronto Marlies, serving as team captain. On June 15, 2018, he signed with Adler Mannheim of the German DEL.

All content from Kiddle encyclopedia articles (including the article images and facts) can be freely used under Attribution-ShareAlike license, unless stated otherwise. Cite this article:
Ben Smith Facts for Kids. Kiddle Encyclopedia.