Jeremy Morin (born April 16, 1991) is an American professional ice hockey left winger who is currently playing for the SC Rapperswil-Jona Lakers of the Swiss League. He last played for SC Bern of the National League (NL). Morin previously played major junior hockey for the Kitchener Rangers of the Ontario Hockey League (OHL), the team he was drafted from in the second round, 45th overall, in 2009 by the Atlanta Thrashers. Morin was later traded to Chicago, then the Columbus Blue Jackets, followed by a return trade to Chicago during the 2015 off-season. Morin was traded to the Toronto Maple Leafs a few months later, and would spend some time within their organisation before a trade sent him to the San Jose Sharks. 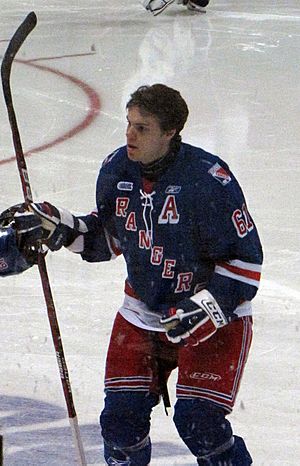 Morin as a Kitchener Ranger in September 2010

Morin began his playing career in 2006–07 as a member of the Syracuse Stars in the Eastern Junior Hockey League (EJHL), being named EJHL Rookie of the Year. Prior to playing in the OHL, Morin played for the USA Hockey National Team Development Program (NTDP) for two years, competing in the North American Hockey League (NAHL). Internationally, at the junior level, he has represented the United States on four occasions, medaling in each junior tournament.

Morin's cousin, J. D. Forrest, plays professionally in Finland, while his older brother Chad was also a member of the NTDP and went on to play for Harvard University in the ECAC. Morin also had an uncle who played college hockey. 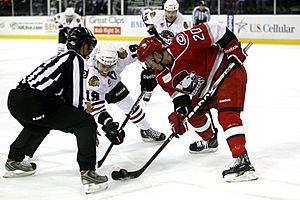 Morin was known as a goal scorer in juniors. He has the ability to shoot from anywhere and find open space to shoot, often going to the front of the net and finding space to score. He possesses a quick release that accompanies a solid shot. Morin is considered a gritty player for a goal scorer, he plays hard and has a bit of an edge in his game. He plays a solid all-round game, possesses a high hockey IQ, and competes every shift.

All content from Kiddle encyclopedia articles (including the article images and facts) can be freely used under Attribution-ShareAlike license, unless stated otherwise. Cite this article:
Jeremy Morin Facts for Kids. Kiddle Encyclopedia.