Benjamin is a city in Knox County, Texas, United States. It is the county seat of Knox County. The population was 258 at the 2010 census.

The community was founded in 1884 by Hilory G. Bedford, president and controlling stockholder in the Wichita and Brazos Stock Company. He named it Benjamin after his son who had been killed by lightning. To attract additional settlers, Bedford gave his stockholders a fifty-acre tract of land and set aside forty more acres for a town square. Benjamin was designed as the Knox County seat when it was organized in 1886. A school opened in 1886 as well. A jail built in 1887 still stands as a private residence and the old bank stands next to the Sheriff's Office. Benjamin was incorporated in 1928 and the population was 485 in the 1930 census. Two structures in the community, a courthouse (1938) and school building (1942), were constructed with Works Projects Administration (WPA) labor. That courthouse replaced the previous stone structure built in 1888. The number of inhabitants reached a high of 599 in 1940, but that figure slowly decreased during the latter half of the twentieth century.

Benjamin is situated at the junction of U.S. Highway 82 and State Highway 6 in central Knox County, approximately 90 miles north of Abilene and 85 miles southwest of Wichita Falls.

According to the United States Census Bureau, the city has a total area of 1.0 square mile (2.6 km2), all of it land.

According to the Köppen Climate Classification system, Benjamin has a semi-arid climate, abbreviated "BSk" on climate maps. 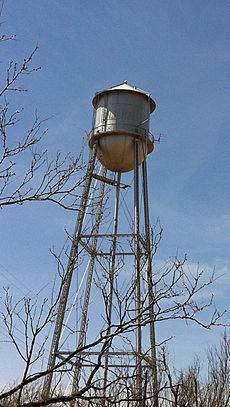 There were 97 households out of which 36.1% had children under the age of 18 living with them, 48.5% were married couples living together, 14.4% had a female householder with no husband present, and 33.0% were non-families. 30.9% of all households were made up of individuals and 19.6% had someone living alone who was 65 years of age or older. The average household size was 2.59 and the average family size was 3.31.

The Knox County Museum, located in the county courthouse, features a barbed wire exhibit and numerous other frontier artifacts. The Knox County Veterans Memorial, located at the corner of U.S. Highway 82 and State Highway 6, honors all Knox County veterans from the Spanish–American War through current conflicts.

Benjamin's Moorhouse Park, dedicated by the state highway department in 1965, and an area know the Narrows located four miles east of the city are also popular tourist attractions.

All content from Kiddle encyclopedia articles (including the article images and facts) can be freely used under Attribution-ShareAlike license, unless stated otherwise. Cite this article:
Benjamin, Texas Facts for Kids. Kiddle Encyclopedia.