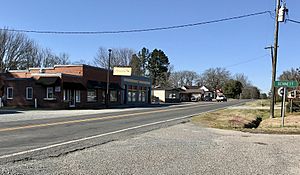 Bennett is a town in Chatham County, North Carolina.

Founded as "Boaz" in 1888, the area was inhabited by the Scott, Kidd, Powers, Sizemore and Heck families, until the Bonlee & Western Railroad reached the area in 1910. The name changed to "Bennett" in 1910, after Atlantic & Yadkin Railroad Superintendent J.M. Bennett. Bennett was incorporated in 1915, with H.A. Denson, a physician, being the first mayor. The new town was to be a city and was built with 80-foot-wide (24 m) streets and 10-foot (3.0 m) alleys laid out in a grid. At one time it had a hotel, a ladies emporium, a small mall owned by D.R. Smith, a jewelry store and chocolate shop combination, a millinery shop, and several grocery stores. A small house was converted into a silent movie theater, and they had an auditorium for local plays called the "Arbor". The bank was robbed in 1927 by Bill Payne and Wash Turner. They were not caught after the robbery, but much later (after a life of crime) they were convicted out in the western states. The town was home to Bennett Christian Church and Bennett Baptist Church; however, only the latter still stands. The train made its last run in 1928, before the Great Depression shrunk the town. A handful of people still call it home, and most of the original houses still stand. The town is well kept up, but lack of access to county water has kept the community small.

Bennett has a hardware store, a fire station, Baxter's Garage and Brady's Grill, a post office, Routh's small grocery, The Ram Food Mart, the Tri-County Ruritans, and Bennett School (K-8). It is home to the annual "Flatwoods Festival" every fall, and hosts an annual Christmas parade.

Bennett is located in Area code 336 instead of Area code 919 like the rest of Chatham County. The community is in the 336 area code because of its proximity to Randolph County (which is entirely in the 336 district) and because phone service is provided by a company based in Randolph County.

All content from Kiddle encyclopedia articles (including the article images and facts) can be freely used under Attribution-ShareAlike license, unless stated otherwise. Cite this article:
Bennett, North Carolina Facts for Kids. Kiddle Encyclopedia.