Pittsboro is a town in Chatham County, North Carolina, United States. The population was 3,743 at the 2010 census and estimated to 4,287 at the 2018 Population Estimates Program (PEP) of the U.S. Census Bureau. It is the county seat of Chatham County.

Pittsboro was established as a town in 1785. The Chatham County Court House stood on land belonging to Mial Scurlock; however, in 1787, the legislature declared that a town could not be established on Scurlock's land. The town's trustees instead purchased adjacent land belonging to William Petty and laid out the town. That same year, Pittsboro was officially named the county seat. Although Chatham County is named for William Pitt, 1st Earl of Chatham, Pittsboro is named for his son, William Pitt the Younger.

Pittsboro was once considered as a potential site for both the University of North Carolina and the state capitol. The university was eventually sited in Chapel Hill, while the state capitol was located 34 miles (55 km) to the east of Pittsboro, in Raleigh.

Some citizens of Pittsboro have revitalized a local form of currency called the PLENTY. It was created in 2002. In 2009, it was being exchanged at a local bank at the rate of $9 for every $10 of PLENTY. The currency failed to gain traction during both releases. 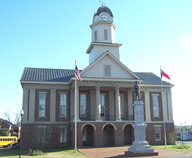 On March 25, 2010, the Chatham County Courthouse (pictured above), while undergoing a $415,000 exterior renovation, caught fire. Smoke was first reported in the area around 4:15 p.m.; the fire was dispatched to the Pittsboro Fire Department around 4:45 p.m. By 5 p.m., smoke was reported to be rising from out of the clock tower, which was surrounded by scaffolds. The building was evacuated safely.

The building suffered severe damage to the clock tower and the third floor. It was reported that the fire had destroyed all the computers and records, but that there are offsite copies and the information should be recoverable.

On March 26, 2010, at approximately 1:30 a.m., the clock tower collapsed onto the main building, but the building as whole was only damaged on the second floor, and only had water and smoke damage throughout the rest of the building. Overall 11 fire departments participated in the fire efforts. 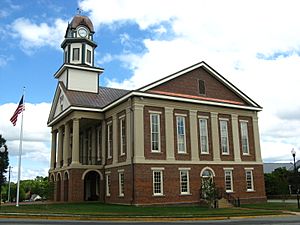 Viewed from the west-northwest, the Chatham County Court House in August 2013, having been rebuilt after a fire destroyed the upper floors and clock tower.

The fire marshal's investigation into the fire determined that it was caused by a soldering torch that ignited wood near the soffit. Workers attempted to extinguish the blaze, but were unsuccessful in their efforts. On Wednesday, March 31, 2010, the Chatham County Commissioners voted in favor of rebuilding the courthouse. The courthouse officially reopened on April 20, 2013.

U.S. Highways 15 and 501 run concurrently through the center of the town as Hillsboro Street and Sanford Road, leading north 17 miles (27 km) to the center of Chapel Hill and the University of North Carolina, and south 17 miles (27 km) to Sanford. U.S. Route 64 bypasses Pittsboro to the north and leads east 34 miles (55 km) to Raleigh and west 16 miles (26 km) to Siler City. U.S. Route 64 Business passes through the town as West Street and East Street, crossing US 15/501 at the traffic circle that surrounds the historic Chatham County Courthouse in the center of town. North Carolina Highway 87 leads northwest from Pittsboro 32 miles (51 km) to Burlington.

Near the geographic center of the state, Pittsboro is 150 miles (240 km) from Wilmington at the coast and the same from Boone in the Blue Ridge Mountains.

Jordan Lake is 8 miles (13 km) east, providing recreation, fishing, boating and scenic panoramas. The lake is 14,000 acres (5,700 ha) of surface and provides water for Raleigh and the town of Cary.

Once home to textiles, the largest clothing label mill in the world, and poultry, the town now depends on commuter income, retail stores and a developing business in genetics. Housing developments provide relief from loss of industry as the town adjusts to a new economy.

The water supply is abundant, derived from the Haw River. In the future, Jordan Lake will provide much of the water supply. In 2010, the wastewater allotment was expanded. The town is 15 miles (24 km) and 25 miles (40 km) from major power plants. Major corridor highways, US 15-501 and US 64, a four-lane divided highway, intersect there.

The town is served by five local schools and a Central Carolina Community College campus:

All content from Kiddle encyclopedia articles (including the article images and facts) can be freely used under Attribution-ShareAlike license, unless stated otherwise. Cite this article:
Pittsboro, North Carolina Facts for Kids. Kiddle Encyclopedia.