Kids Encyclopedia Facts
Not to be confused with Silver City, North Carolina.

The town was the retirement home and burial location of actress Frances Bavier (1902–1989), best remembered for her role as Aunt Bea on The Andy Griffith Show, a television sitcom in the 1960s set in the fictional town of Mayberry, North Carolina. Siler City was featured in episode 140 (season 5 episode 13) of The Andy Griffith Show (December 14, 1964) as the place where Andy and Helen were taken by a game warden for fishing without a license.

Most recently, the town served as the backdrop for Paul Cuadros' book, A Home on the Field, a true story about his experience coaching a Hispanic high school soccer team to a state championship in spite of adversity. In recent years, Siler City has become a suburb of Greensboro and the Research Triangle Park.

The population has increased by 75% from 1990 to the 2016 estimate, as workers have been attracted to new jobs in the poultry processing industry. 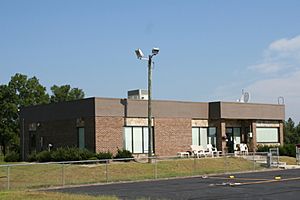 Siler City Municipal Airport (5W8) is a single runway airport 3 miles (5 km) southwest of downtown Siler City. The airport is used both by local residents and as a refueling stop for transiting military and general aviation aircraft.

All content from Kiddle encyclopedia articles (including the article images and facts) can be freely used under Attribution-ShareAlike license, unless stated otherwise. Cite this article:
Siler City, North Carolina Facts for Kids. Kiddle Encyclopedia.