Bentonville was platted in 1838. It was named for Thomas Hart Benton, a senator from Missouri.

Bentonville was once a booming "frontier" town during the early days of westward expansion and was a frequent stopping place for traders. Among the local landmarks is Alfred Loder's store (built in 1848 and was one of the first brick structures in the area), which still stands and is a private residence. Other remnants of the past are still visible. Across the corner from Loder's store is a cement watering trough used for watering horses, and south of town in the wooded area next to the Bentonville Christian Church, a one-room schoolhouse, although dilapidated, can be seen from the road. 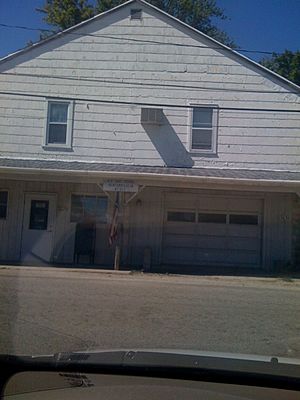 Although Bentonville is unincorporated, it has a post office, with the ZIP code of 47322, an independent Christian church, and a volunteer fire department. Bentonville's Volunteer Fire Department serves 63 square miles throughout Fayette County, and also responds to emergency calls in Rush and Wayne counties when needed. Their fish fry is held twice yearly at the firehouse. The fish fry was formerly held at Manlove Park, which is two miles east of Bentonville.

All content from Kiddle encyclopedia articles (including the article images and facts) can be freely used under Attribution-ShareAlike license, unless stated otherwise. Cite this article:
Bentonville, Indiana Facts for Kids. Kiddle Encyclopedia.