The town of Berlin sprang up in 1896 when substantial gold veins were discovered nearby. In total, the Berlin Mine produced 42,000 troy ounces (46,080 oz; 1,306.346 kg) of gold, all removed from tunnels by hard rock mining techniques. The mine became unprofitable by 1911, and the town of Berlin became uninhabited shortly thereafter.

Today, the ore mill still stands, and the stamps and mercury float tables can be viewed. Other buildings still standing include homes, blacksmith shop, stage coach shop and stable, machine shop, and assay office. Some buildings are open to enter, while others offer interior views of their contents through the windows. There are also headworks on some of the mine shafts. 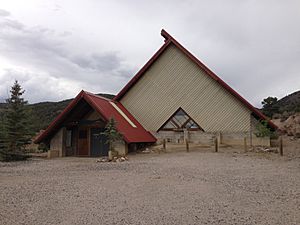 Ichthyosaur fossils of the species Shonisaurus popularis were first discovered in the area in 1928. Excavations were conducted through the 1960s, and the remains of approximately 40 ichthyosaurs were found. Until 2004, these remains included the largest ichthyosaurs ever discovered. Several specimens were left where they were found, and can be viewed by the public. These specimens are protected from the elements by a large barn. The fossils are about a 10-minute drive from the Berlin ghost town. The ichthyosaur fossils were designated a National Natural Landmark in 1973.

The park offers camping, picnicking, nature trail, and non–winter-month guided tours of the fossil shelter. Multiple trail signs relate the history of the town of Berlin and the mining camp of Union. Guided mine tours proceed approximately 500 feet (150 m) into a tunnel that connects with the Berlin Mine; all other access to the underground works is prohibited as too dangerous.

All content from Kiddle encyclopedia articles (including the article images and facts) can be freely used under Attribution-ShareAlike license, unless stated otherwise. Cite this article:
Berlin–Ichthyosaur State Park Facts for Kids. Kiddle Encyclopedia.